Our Family Vacation to Houston Part 17

Well, we didn’t get much sleep the night before, but as always, the kids woke up early.  Jason felt surprisingly well, considering what he had gone through the day and night before, and though I didn’t get much sleep either, we all got up and got ready to go to the conference.  Jason decided that his neck didn’t feel too bad and that instead of filling his high-powered prescription drugs, he’d just take some Ibuprofen!  Insert peals of laughter from me here.

The girls were all excited about their classes.  All three were in a group together, which made it easy for us to drop them off and pick them up.  I thought it was neat that they kept families together.  Little Jason was the only one that didn’t have a class, but there was a nursery that you could use for seventy-five minute intervals.  We left him for the first session and Jason and I enjoyed being together, getting ideas and being encouraged. 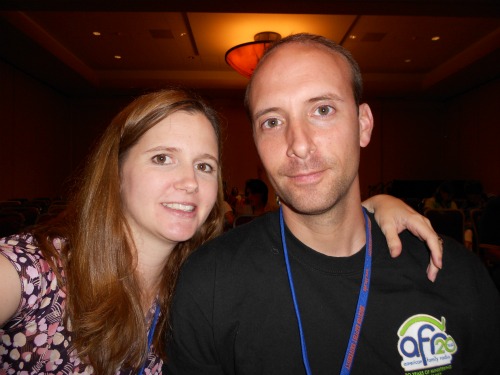 Our favorite speakers were Todd Wilson, who is hilarious, and Andrew Pudewa, who gave me lots of ideas that I think will help me teach my kids.  Todd Wilson gives encouragement to homeschoolers by plenty of personal examples.  My husband kept saying, “He’s talking about me!”  We brought home Andrew Pudewa’s books All About Spelling and Phonetics Zoo, as well as his writing program for elementary children.

When there was a break for lunch, we grabbed the kids and ate a quick meal at the hotel where the conference was being held.  Little Jason only wanted to be with his big sister, so he sat with her and ate his lunch during the entire hour.  It’s encouraging to see the older kids beginning to help more and to see the little ones’ love for their older siblings! 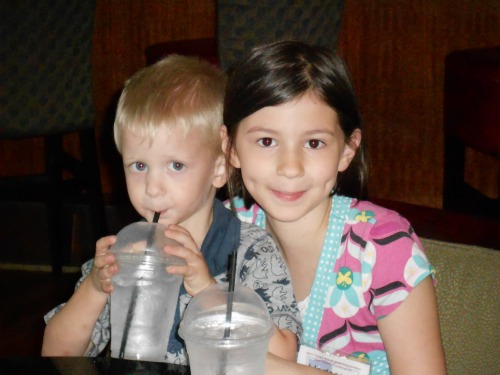 We all went back to the conference and enjoyed every minute of it.  Little Jason was so good in the nursery that the lady told me as long as it didn’t get too crowded that I could just leave him there.  So even though we had prepared to keep him with us for most of the sessions, we didn’t need to!  This was such a blessing!

That evening the entertainment was John Erickson, the author of the Hank the Cowdog books.  This was our one disappointment of the conference.  We sat in the back since we had our whole clan with us, but we couldn’t see or hear anything.  Faith was especially disappointed.  Sitting there straining to hear, the lack of sleep began to hit with force, so unfortunately we all left early and went to bed.  We hope to get to see Erickson again next time, and we will be sure to get there early enough to sit in the front!