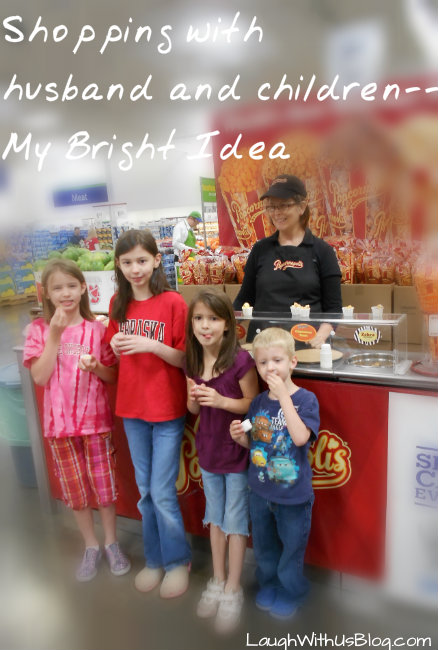 “Let’s go to Costco!” I said to Jason on Saturday. I looked at myself. I was dressed in something other than my house work uniform, my hair was brushed, and I was actually wearing makeup. It was definitely a day to go out on the town. I said, “We can go look around, get samples, (yes we’re free loaders) and then get the kids pizza and ice cream!” Jason liked the idea and we were all in the van headed to Costco just a few minutes later.

Costco was just as crowded as it ever is just an hour and a half before closing on a Saturday, but we weren’t going to let it bother us. I mean come on we were out of the house! We were merrily looking around and tasting some delicious food pushing and shoving our way in and out of the aisles. The girls wanted some granola bar samples but there were way too many people so Jason left me, mid aisle, with all four kids. He came back with one for everyone except me so I walked back over to get one. “Oh good there’s one left!” The lady looked at me with big round eyes and said, “Yeah a man just came and took SIX of them!” I must not have done a very good job of concealing my thoughts because she then said, “Maybe he was your husband!”

The kids were starting to get whiney and the lines were getting longer so we headed over to check out. Trying to save time, I decided I should go wait in the food line. At Costco if you don’t carry cash you have to order your food in the regular line and then go wait in the food line to get your meal. “Don’t forget to order the food and use the coupons.” I yelled over my shoulder as I carried Baby Jason, pulled on Faith’s hand, and headed to wait in the food line. Pretty soon I was near the counter and Jason wasn’t back yet. I let one…two…three…five people go ahead of me. It was getting embarrassing. Finally I realized Jason was no where in sight. “Well my husband disappeared.” I told the lady as I walked away from my cherished spot.

Jason had forgotten to get his shampoo that we had coupons for and I found him once again at the back of a checkout line. Back I go to the food line. I wizened up though and this time kept a good eye on him to make sure I didn’t lose him again. Pretty soon he was up to the cashier and I watched as he pushed Grace and Joy down one side where they swipe the food items, and he walked around to the other side to pay, leaving our two angels to fend for themselves with no immediate accountability. Joy was grabbing the food and standing up and sitting down. Grace found a divider and merrily placed it on the food belt. It was taking Jason a long time to pay, and I was again at the front letting people by me. Sure enough, instead of gallantly running to me with the receipt, rescuing my front of the line position, he went and got in yet another cashier line. “Faith dear I don’t believe it but Dad’s not coming.” Again I forfeited my spot in line and walked over to where Jason was waiting. “What happened?” Grace had placed the divider in between our pile of stuff so Jason had only paid for half of the items. Which is why it had taken him so long to pay, but when he paid for the second set of stuff he forgot to use the coupons AND forgot to order the food! Finally they reimbursed him for the coupons, and he paid for our food and shoved his three receipts in his pocket.

“Jason I’ll sit here with the kids while you get the food. I’m embarrassed to go stand up there again.” No problem, that was fine with him. As I watched from my nice comfy seat with three girls trying to do gymnastics on the benches, I noticed that he was at the end of a long line but there was no one in the second line. I yelled, “There’s no one in the second line!” He looks around and yells back, “There isn’t another line.” I’m shaking my head vigorously while all the people behind him run and get in the other line. “Well you told everyone else!” He yelled back at me. I thought that was hilarious in spite of everything. While Jason was getting the food Joy decided to have a total melt down. By the time Jason delivered the food, it was time to take a trip out to the van with Joy. We uncomfortably gulped down our food. Jason Jr. (who I was still nursing at the time) decided it was way past his meal time and he was letting everyone know it. I’d had enough to eat and the younger two girls had lost their ice cream privilege by their bad behavior so I told Jason to enjoy his ice cream with Faith and I’d take the rest to the van and feed the baby.

A little while later I looked out the window and saw Jason and Faith RUNNING to the van. “Enjoy your ice cream?” I asked when he got near. He got that funny look in his eye. When he was leaving the store, he explained, he could only find two of the three receipts he had for all the loot in the cart. So he had shampoo that it appeared he was trying to smuggle out of the store. He tried to explain to the lady all he had gone through, but the unsympathetic woman just told him to stand aside and wait for a supervisor. Well Jason had had enough. He handed her the receipts and yelled, “You verify it with your supervisor!” as he took off running to the van. I think that the next time I get a bright idea…I’ll do it anyway just to see what happens!