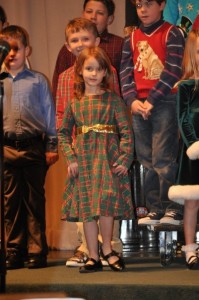 We arrived at the girls’ school Christmas concert last year the required half hour early and found a good seat near the front. As I chatted with the mom in front of me, I mentioned that I hoped Joy (five years old at the time) would do okay because it is really hard for her to sit still. With camera at the ready, I watched as the kids all filed on stage, and I clicked pictures in unison with all the other proud moms and dads.

During the first song things went relatively well. Joy stood on the very front row on the left end. She kind of swayed to the music a little too much, but at least she was singing and watching the director. For the second song, Joy decided she was the director and, as all the other children stood like little statues, my Joy waved her arms up and down during the entire song. I was actually pretty proud of her for staying in her place for half of the program, even though she may have danced around in her spot too much.

Everything fell apart, however, around the middle of the concert when a precious little girl had a solo and the rest of the choir sat down behind her. As I was watching the soloist, I noticed movement out of the corner of my eye. I looked over at Joy. She was whispering to the little girl in the green Santa-type dress beside her. To my dismay, she then grabbed the white furry trim on the child’s sleeve with both hands and yanked as hard as she could. Her face lit up as she looked at the white fuzz in her hands. Not wanting to be the only one in on the fun, she shared a chunk with the owner. Joy held the fuzz up in the air and then threw it and watched with delight as it floated down to the ground. She then encouraged her friend to throw hers and watched happily as it floated down just out of reach. Having stayed in her assigned spot this whole time, she finally could stand it no longer and crawled to get the cherished source of entertainment. Three or four times she threw the fuzz up and watched it float. It must have disappeared because she once again grabbed at the little girl’s furry trim, and with eyes narrowed and lips pursed, she yanked with all her might.

I covered my face with my hand and watched with one eye. It was so horrible and so funny, but I knew I must not laugh. I must not. It occurred to me to video tape her, and I actually held up the camera with my other hand. Then I put it back down. How could I possibly think of videoing this? What kind of mother was I anyway? I mean, that could be used as evidence!

Evidently, the newest batch of fuzz was not as interesting. It seemed it was more fun to acquire the fuzz than to play with it because all of a sudden Joy launched a full scale attempt to rid the poor little girl of her pretty white Santa fur. Joy grabbed the bottom of the dress. Yank! A different spot. Yank! A spot on the sleeve. Yank! The adorable little girl was absolutely too good natured. She would just pull her dress closer to her and keep smiling. As I sank lower and lower in my seat, I noticed the man two rows in front of me would crane his head over and look at his wife with mouth agape and shock on his face. I hoped that wasn’t the child’s parents. The thought that actually occurred to me was, “She’s like Beverly Cleary’s Ramona  on steroids…and she’s my daughter!”

Finally, the solo came to an end and the choir stood up. The kindergarten teacher discreetly walked up and said something to Joy, and she behaved . . . for a little while. Soon, however, she once again began to attack her neighbor’s dress. Then the little girl turned her back, and Joy started tugging at the bow of her sash. When she started pulling at the little girl’s zipper, I did begin to come out of my seat, but the teacher once again came to the rescue.

The next few songs had more action, so I was thankful that Joy had enough to occupy her attention. The last song was a carol medley. When they sang “fall on your knees” my daughter was the only one that actually fell on her knees. I thought, “We’re going to have to seriously rethink our singing time at home. Don’t my kids know that the spontaneous motions and dancing we do at home are NOT okay on the stage at the school concert?” Mercifully, the program finally ended. The director announced for parents to walk up and claim their children. Well, Jason was somewhere in the back heroically taking care of our youngest two, but no way was I going up there. I sank in the pew and pretended to fiddle with my camera. The lady in front of me turned around and said pleasantly, “I can see what you mean about Joy not being able to sit still!”

When the girls found me, I told them to go find their dad, postponing the inevitable. I got my things together and walked to meet my family for the after-concert reception. A lady approached me laughing. “Wasn’t that hilarious?” she exclaimed and started talking about “that little girl.” Joy came running up to me, and the lady stared in shock. “Oh my goodness, is that your daughter?”

A constant flow of people stopped by our table at the reception with comments such as “So you’re the mother of this little girl.” “She certainly stole the show!” “It was such fun to watch her!” The director of the school came over and took a family picture. I finally got a break long enough to look for the mother of the little girl with the Santa dress. I apologized profusely as did Joy at my prompting. The lady laughed, thankfully, and said she had been waiting to meet Joy’s mother. I now have a special identity. The people who were at that concert will forever think of me differently. I’m not just any mother. I’m Joy’s Mom!

This post is linked to Works for Me Wednesday and Pastor’s Girl’s Ponderings.