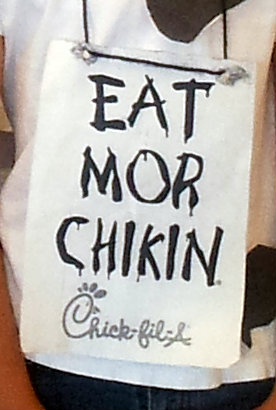 We’ve been having issues with our air conditioners.  In fact we had three different repair men here last week!  The last one came Friday evening.  Friday was Cow Appreciation Day at Chick-fil-A.  Jason surprised me and wanted to go.  So we quickly made him a cow costume like the rest of ours and he enjoyed some awesome chicken.  The repair man showed up after we had eaten and gotten back home and safely stowed away our costumes for next year.

Thankfully, this last time wasn’t a huge issue with the air.  The guy quickly showed Jason what to do.  Jason showed him out and talked to him for a little while in the door way.  Jason came back and sat down opposite me in the living room.  I don’t remember what we were talking about but Jason gasped in the middle of a sentence and asked, “Do I still have the cow nose on?”  Sure enough the tip of his nose was very black just like I had painted it to go to Chick-fil-A!  “No wonder the guy kept looking at me so funny!”  We laughed and laughed.

Oh and here’s one on me:  Yesterday I told you about our fun day at Chick-fil-A.  As I read my story that morning, (I write the posts the day before.) I noticed I had written, “It’s also great to watch the people come in who are not dressed.”  Ah ha ha ha!  “Dressed up in a cow costume” is what I MEANT!  Hilarious!