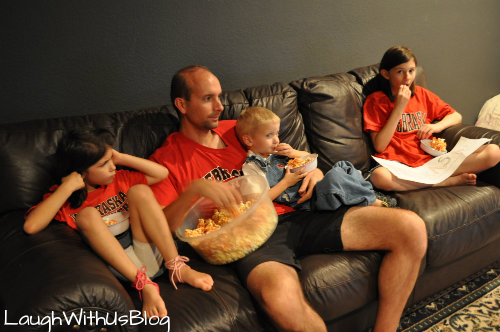 It’s that time of year again!  The crew has been asking me about our Nebraska party.  The last few years I have made a sit down meal for one of the first televised games of the year.  Well, this year…I thought I’d make things a little easier.  I wanted to make something traditional, but I couldn’t thinking of anything else.  Got any ideas?  I’d love some!  Anyway, the only thing I could think of was Valentino’s Pizza, but I couldn’t make Val’s!  So…I went with PRETENDING we were eating Valentino’s Pizza, and just ordered from a local joint.  Hey, pizza makes everyone happy!  Quit looking at me like that.  It was FUN! 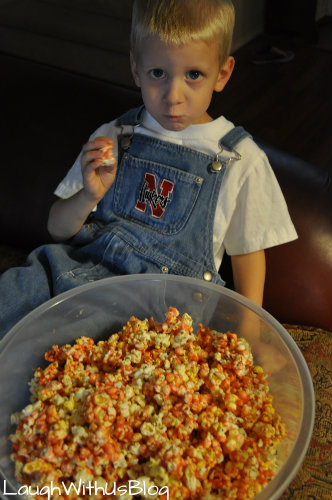 I had to have a dessert so I decided to make red and white caramel corn.  Oh I made this really yummy caramel and mixed it with…YELLOW butter popcorn and of course ended up with red and yellow popcorn.  But it was pretend night right?  So we just pretended it was red and white!  The recipe was really good though.  I’ll have to share it with you!  At least we didn’t have to pretend to like it.  That would have been a little far fetched.  Ahem! 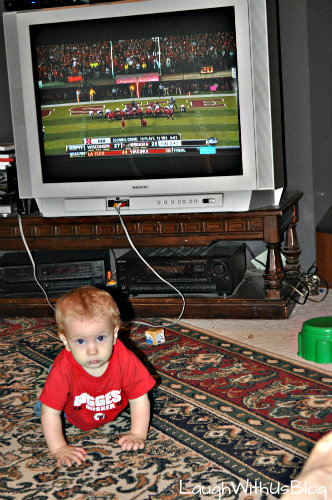 I thought we were going to half to use our imagination to enjoy the game, at least through the first half of that Nebraska/Wisconsin game.  But then the second half began, and we were crazy with excitement.  Woo hoo.  What a ball game!  No pretending there!