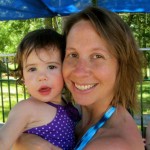 Shelly is a friend of mine from college.  She wrote out an experience she had with the police and is letting me share it with you.  Crazy!

We live in a large house. It has two separate staircases and two living areas connected by the kitchen on one side and a den on the other. All this to say that unless you are in the front room you have a hard time hearing if someone knocks on your door.

We were having company the next day, so I decided to do a good job of vacuuming around the house. Ryan, my husband, had taken all the kids but Adilee, my toddler, to a youth outing, and I had the house to myself to get some work done.

I began to vacuum and at one time thought I heard someone knock on the door but wasn’t sure and just kept on with what I was doing. I started in on the stairs and then up to my room where in our bathroom we have two walk in closets. I was doing a good job even using the attachments to do around the baseboards even in the closets. Then I moved into Adilee’s room. That’s when I heard loud male voices downstairs. Okay, that got my attention and I turned off the vacuum and went to the top of the stairs and there was a policeman! I uttered something like, “What are YOU doing here,” my mind going to the worst case scenarios of course. He began and then asked me to come downstairs. He didn’t seem to somber or anything so I began to think it might not be too big of a deal but still….I got to the bottom of the stairs with Adilee trailing after me and there was not one but THREE policemen there! They explained that the mailman had come to deliver some mail and knocked on the door. I had the door open with the screen door locked and I guess he saw Adilee standing there and when no one came to the door he called the police thinking she was alone. They came and knocked for 20 min!!! I know, right, I told you I was doing a really great job of vacuuming! I assured them that I was home and the front door was locked. They came in through the garage. They seemed a little annoyed and I was tempted to have them go upstairs and stand there WITHOUT the vacuum on and see if they could hear me knock. I’m sure they couldn’t so you can imagine with the vacuum on.

They left and when I looked out the door there were three police cars, the mailman:), and another car which I can only imagine was probably the Police Chief! Ha!! All’s well that ends well I suppose. But that was enough excitement for one day and you can be sure the next time I vacuum all doors will be locked! I suppose I should add I was thankful for their concern. Hopefully they were able to see the humor in it like I did afterwards!:)