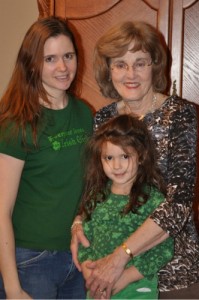 Last night I received one of those dreaded phone calls.  They had called an ambulance to take my mom to the hospital.  She was home alone and suddenly couldn’t focus on her book or make sense of the words.  I’m not sure how long before my dad got there, but he called my aunt who is a nurse.  She told him to take her blood pressure.  It was incredibly high-over 170.  She was having a difficult time talking.  They said she had some memory loss.

Later at the hospital her blood pressure went back to normal.  From what I understand they gave her anti-stroke medicine.  They did a Cat Scan, but we don’t know the results yet.

I just talked to my dad.  He is doing well, but very concerned of course.  He told me that the book of James says we are going to have trouble and to count it all joy!  We would all very much appreciate your prayers.

Update May 2 @ 8:30 am: We found out that mom had a TIA which is referred to as a mini-stroke.  A transient ischemic attack (TIA) is when blood flow to a part of the brain stops for a short period of time. Thy symptoms are very similar to a stroke.  A TIA is thought to be a warning sign that a true stroke may happen in the future if something is not done to prevent it.

Dad was very encouraged after talking to the neurologist last night.  The doctor says there is no lasting damage as far as he can tell.  Apparently this is not a new issue, and she may have been having smaller episodes and not realized it–so scary!  He would like her on some medication, but otherwise says that she is fine!  We are still waiting to hear from the heart doctor.  Thank you so much for praying!