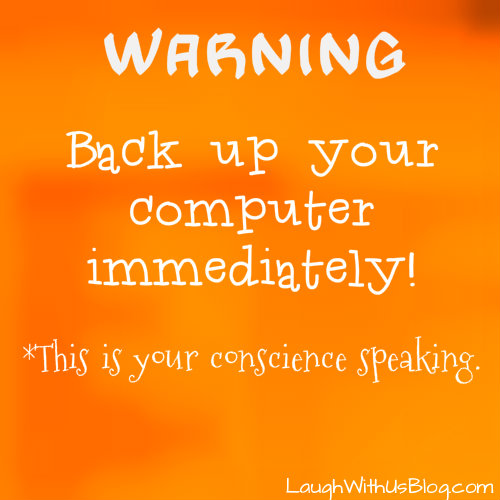 What does a blogger do when her laptop crashes?  Well freak out of course.  I’m pretty sure I lost everything and though there are a few files on there I really wish I had, none would be worth paying a lot of money to recover.  Mostly it’s just a bummer.

The laptop was mine, and it is where I did all of my blogging.  It took me an entire day to get set up on our PC so that I had what I needed.  It’s been a mad two days of looking at laptops online and in stores…with five kids.  Mad doesn’t even begin to describe it!

We purchased one, brought it home and then realized it didn’t have a CD Rom drive.  What no DVD player?  I thought they all had one, but actually with more and more people going the direction of digital download they are not putting the CD Rom drive in laptops.  Well I know now.  But I want a CD Rom drive so we took it back.

After shopping around some more, the guy at Best Buy just about lost his eyeballs when he asked about my operating system and I told him I had Vista on my laptop.  “Oh well then any laptop here will be much better that what you were using!”  I guess that’s…good?  So we’re still trying to decide and may just go with the cheapest one, because I probably would like it just fine!  Decisions decisions.

So as a word of caution, if you’ve been thinking that if you backed up your hard drive then it would probably crash, take it from me.  It’ll crash anyway!  🙂