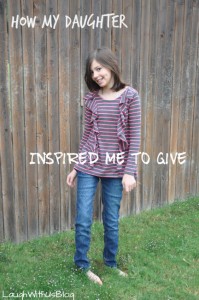 We joined the 30 Day Giving Challenge this month, not because we are the greatest example of giving, but because we see the need to be more giving.  It is so easy to be consumed with our own every day details and problems and forget the greater picture.  Also, I’ve been so blessed and inspired by how others give that I want to bless others in the same way.

A toy company held a contest for kids to share a video about how they were an everyday hero.  Faith wanted to enter the contest, so we made it part of our schooling.  She sat down and brain stormed ideas.  Then she wrote out what she wanted to say.  Finally, she memorized it and presented it.  How much more fun to write for a contest than just because Mom told her to write!

My husband and I did not do the tooth fairy thing.  This is the story of how my oldest daughter Faith, who had never received money from The Tooth Fairy, wanted her sister to have the excitement she never had and gave her sister her only dollar.  I didn’t find out about it until it was all over.  I was so touched by her giving heart!

She didn’t win the contest, but she had fun and learned lots.  I hope you’ve been as inspired as I was to bless others around you!