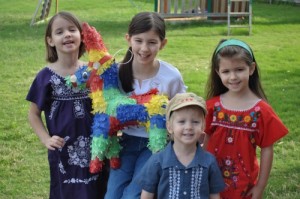 I was a little bummed that a must-attend function was scheduled for cinco de mayo at the kids’ school.  After all, a cinco de mayo party on a different day is no longer cinco de mayo!  I do still have a Mexican fiesta planned.  That day my two older girls were at their “school” for homeschoolers that they attend once a week, so I just had my youngest two with me.  I wanted at least to eat Mexican food for lunch, but I hadn’t decided what to do.  First, I had to run to Wal-Mart on an errand.

I found the item I needed and was headed to the check-out counter when Grace spied a huge cake and called my attention to it.  I looked where she pointed, and right in the middle of Wal-Mart was a stage set up with cinco de mayo balloons and two huge sheet cakes decorated for the occasion!

At my daughter’s prompting I found an employee and asked what was going on.  “A cinco de mayo party and you’re just in time!”  They pointed me in the direction of the bank and said it was starting off with a free Mexican lunch.  Well, you know me and free stuff.  I went over there and was first in line!  They served fajitas, Mexican beans, and chips with guacamole!  I got the three of us each a plate and wheeled the cart over near the stage.  We sat down on the floor next to the huge cakes and ate a delicious Mexican feast!  As we were finishing eating, in came a band from a local school, dressed to the hilt in traditional Mexican mariachi garb!  A man got up and gave a short speech about the history of cinco de mayo, and then the band played for a full hour.  They played “Las mañanitas” and “Canta y no llores” among other songs, and I just basked in nostalgia.  While I enjoyed the music, my two kiddos, dressed in their traditional Mexican clothes, danced all around.

Toward the end of the concert, a couple of ladies came over and started serving the cake.  My children received the first two pieces and quickly sat down and ate them.

This was the best cinco de mayo surprise ever!  The food and music was great and it was all free!  Of course it would have been better had I taken my camera, but I did get a picture of them in their Mexican outfits that morning.