Thanks so much to  Chuck E Cheese for hosting Bobby’s 4th Birthday Party.  All opinions are my own. 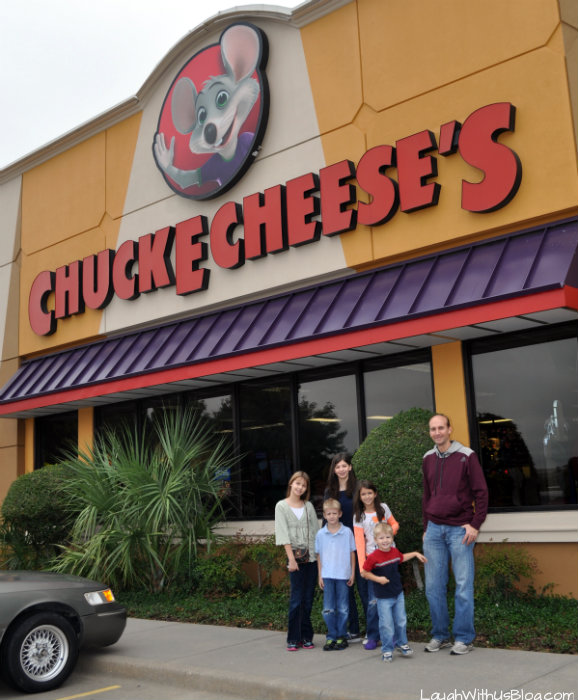 Bobby’s birthday falls over the Thanksgiving weekend.  If you remember last year, we were so busy that I kept putting off celebrating his party until (gasp) months later.  This year, thanks to Chuck E Cheese, we were ahead of the game.  Bobby was so excited.  As we got out of the car he pointed up to the sign with Chuck E Cheese’s photo and said, “Look, there’s my friend!” 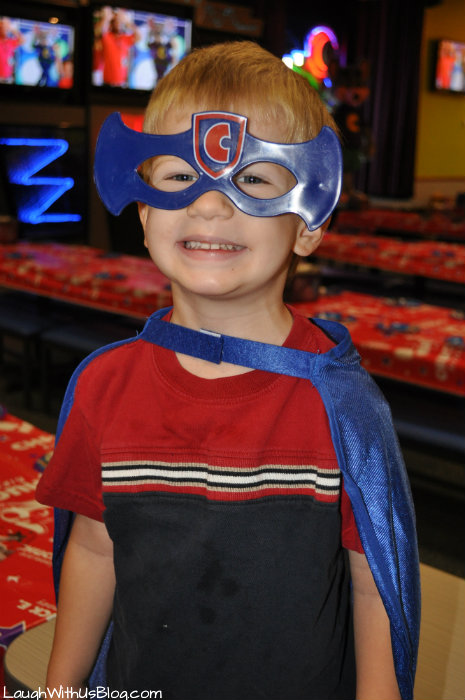 Upon arrival Bobby was outfitted with his very own Chuck E Cheese superhero cape and mask.  He was so excited! 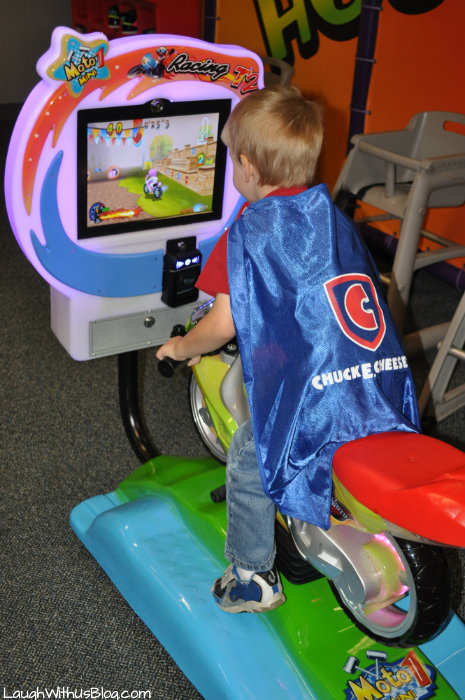 The first 45 minutes or so of the party the kids got to use their play points on the rides or games. 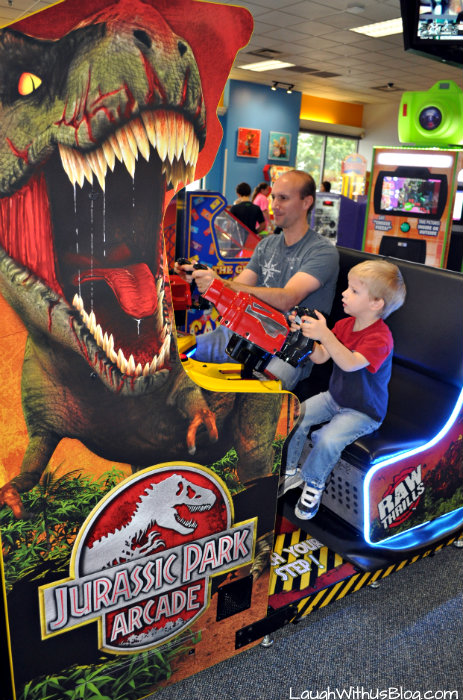 There goes Daddy taking advantage of our little guy’s play points again.  This cracked me up.  I think Daddy looked a little more scared than Bobby or maybe he just realized I caught him.  Ha ha! 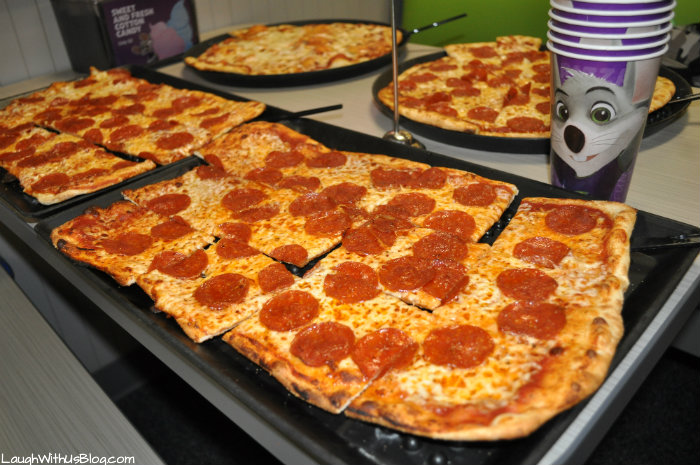 And then the pizza was served!  We loved Chuck E Cheese’s new Thin and Crispy Pizza!  Their pizza dough is made fresh in-house, never frozen, and topped with their own tomato herb sauce, freshly shredded mozzarella cheese and your choice of meat.  Mmm!  Thin and Crispy Pepperoni was a huge hit at our party! 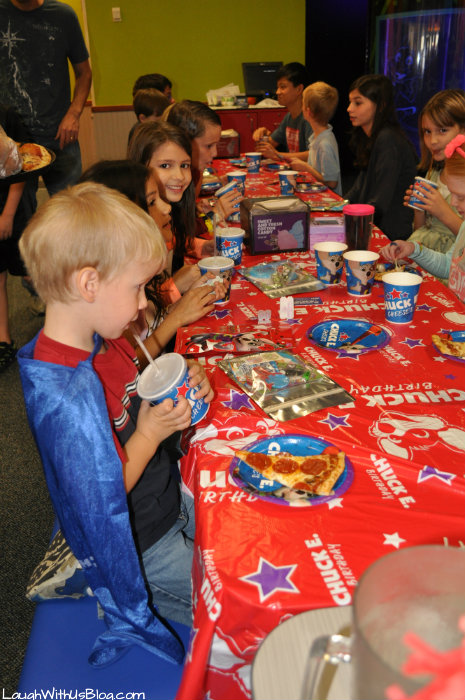 We were given our very own party host who served the kids their drink and pizza, but also answered all of our questions throughout the party, helped us with lost cards and led us in all the activities. 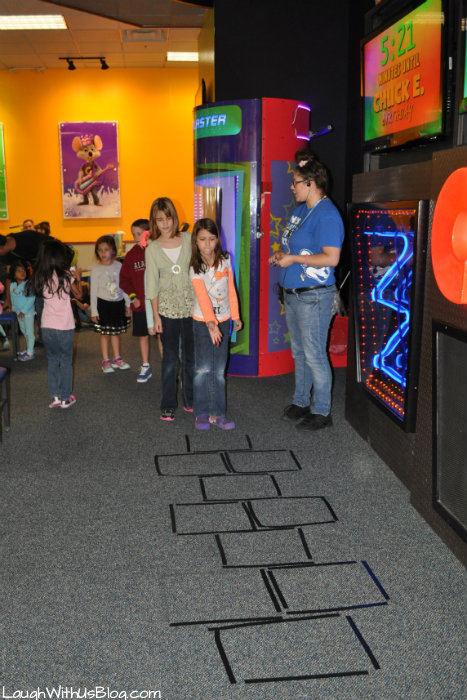 While kids were finishing up their pizza our host led a game of hopscotch. 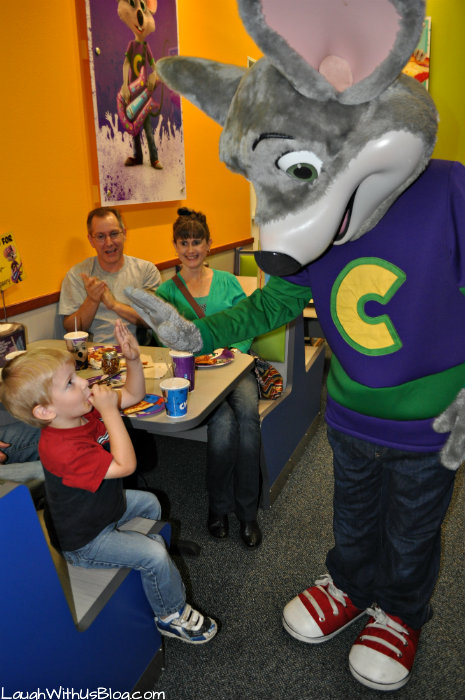 Chuck E Cheese himself made the rounds making sure to give the birthday boy a special high five.  So cute! 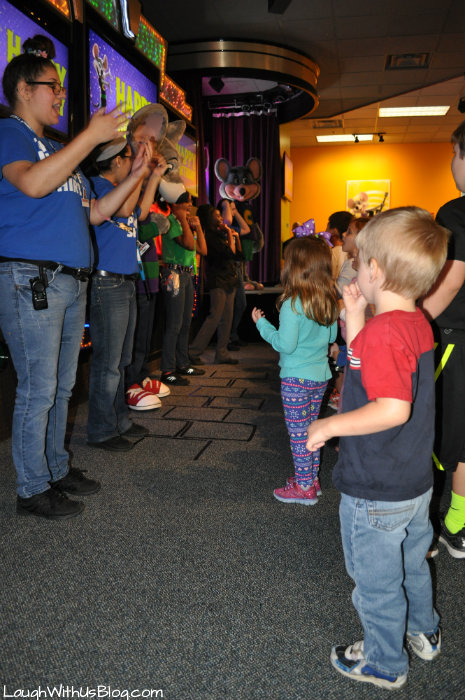 Next was a dance party!  The kids at our party were a little shy to join the dance, but Bobby went right up there.  It was like he knew it was just for him. 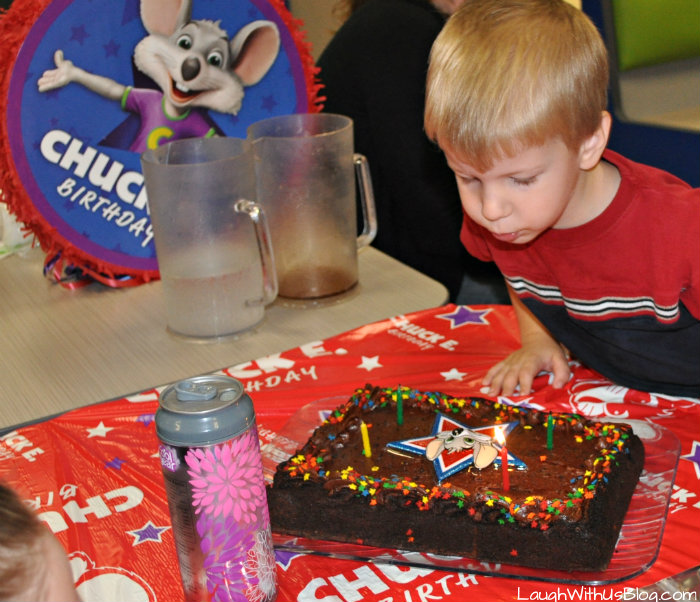 And what’s a birthday with out a cake right?  Everyone joined Chuck E Cheese to sing happy birthday to Bobby and just like that he blew out those candles.  The kids ate their cake in no time.  This party just flew by! 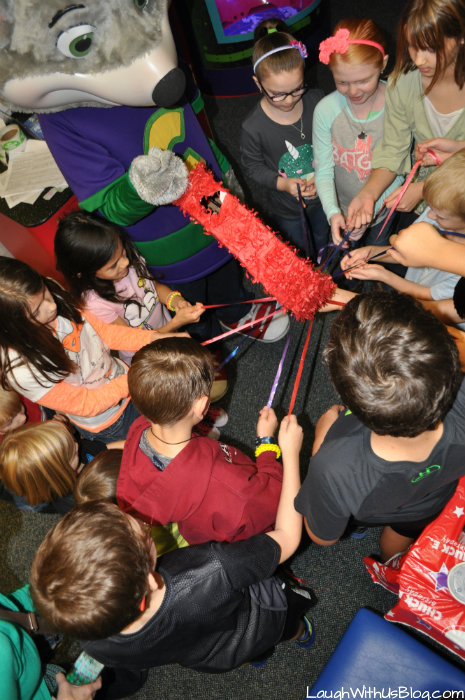 But the fun wasn’t over yet!  They loved the Pull String Pinata loaded with 40 play points and 400 tickets.  Each child grabbed a sting and they all pulled at the same time.  Tickets went flying everywhere as did children.  What fun! 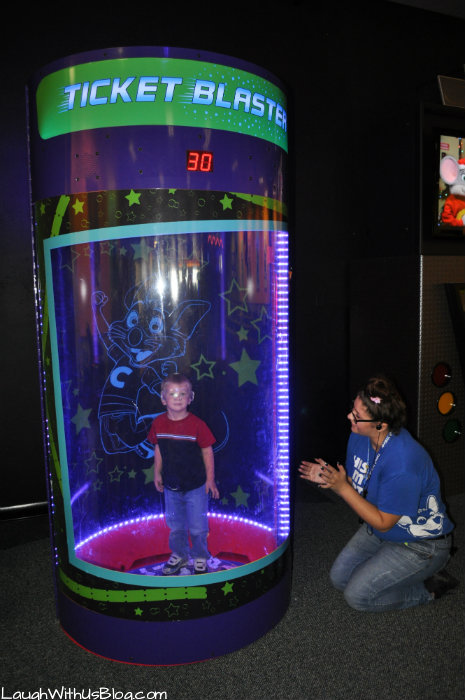 The birthday boy also had the Ticket Blaster experience.  Once the blaster is turned on he had 30 seconds to grab as many tickets as he could.  He wasn’t sure what to do at first and by the time he figured it out he came out with 9 tickets.  He was so proud of them, but he was given 200 as that is the minimum.  I was also given a turn in the Ticket Blaster and I snagged the 1000 ticket!  Gotta say…that was fun! 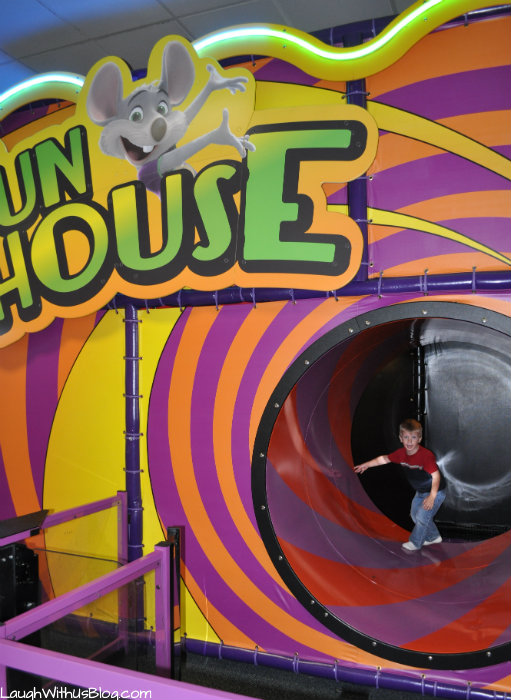 The kids all then ran to play and use up the rest of their play points. 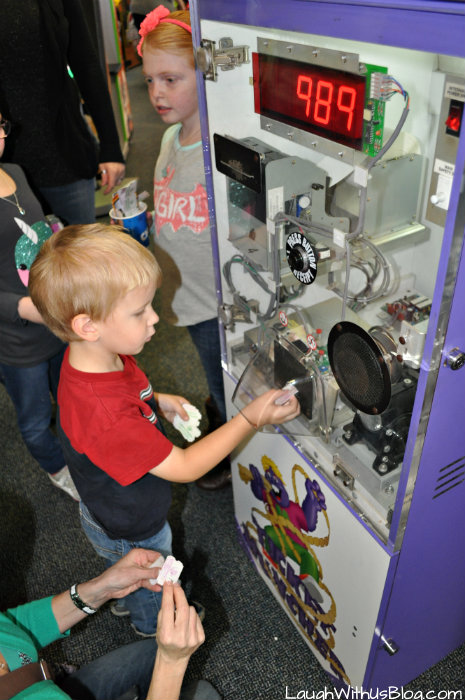 Then it was time to count those tickets.  I think Bobby had as much fun  loading his tickets in the machine as he did playing the games. 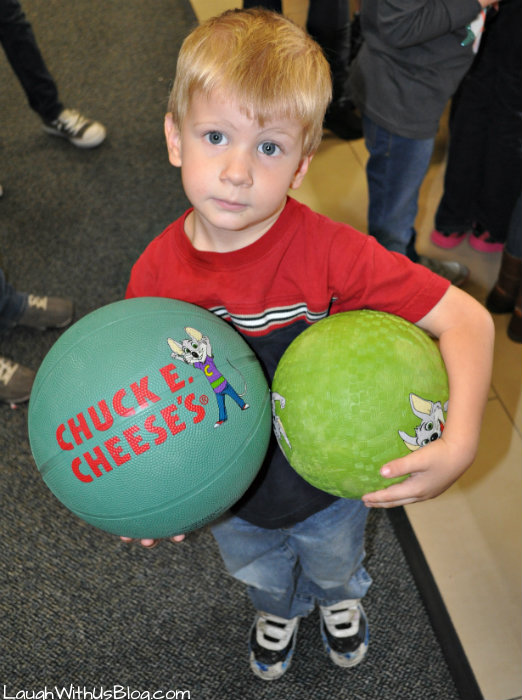 Choosing a prize was not difficult for Bobby.  A ball of any size always makes him happy!  What an amazing day! 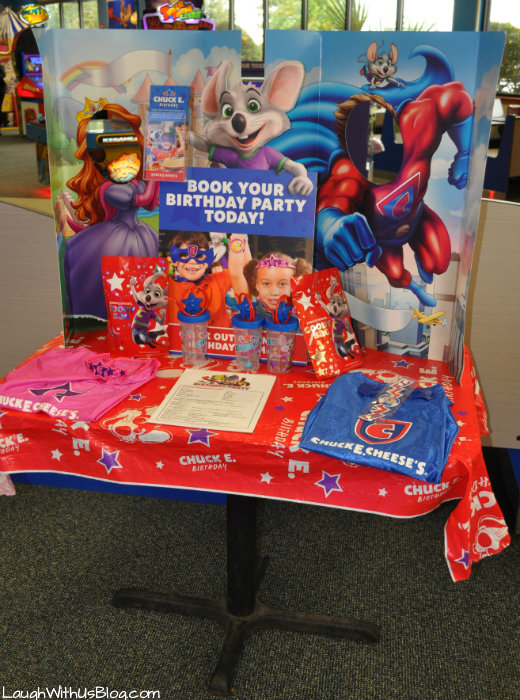 You know our parties usually consist of a family celebration at home.  A party with more than family always sounded like too much for me to do, but a party at Chuck E Cheese is so easy.  All I had to do was invite the guests and Chuck E Cheese did the rest.  It was a perfect day!

Planning a birthday party?  Chuck E Cheese can help.  Check out all the great party options.