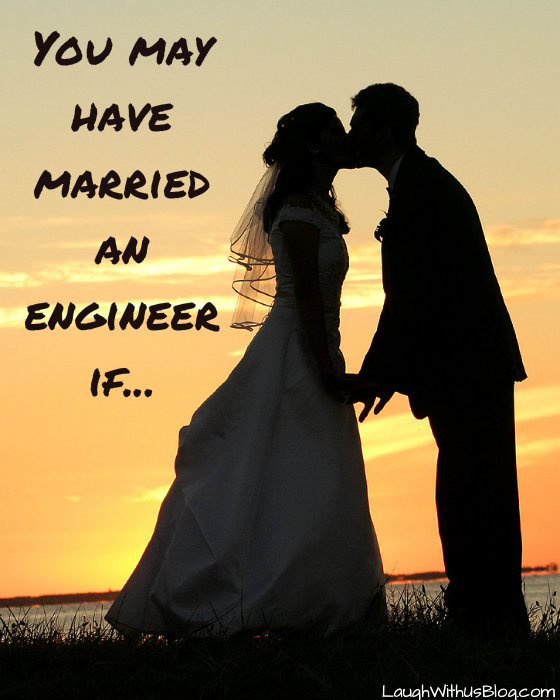 1.  He does one thing at a time.  He concentrates on one thing at a time and can uncannily tune everything else out.  For example, he cannot talk on the phone and watch the children.  It is very possible that while he talks on the phone, his children could be playing with sharp kitchen knives right under his nose, and he would have no idea!  Ahem.

2. He thinks in numbers, big ones.  When his unsuspecting wife asks for something he finds trivial, he might tell her how much that would cost him for the next week, month, year…and how much he would have to pay if she lived to be eighty.  He would rattle this off in a matter of seconds.  Small numbers he doesn’t really understand.  Like if the kids ask, “Dad what’s five plus three?”  Nope, that’s a mom question!

3. He likes to take things apart, but doesn’t always know how to put them back together.  Like when a fridge quits working for example.  If all else fails use Duck Tape.  If Duck Tape fails, it’s time to call the repair man.

4. He can’t make a purchase without research.  If his wife wants to make a purchase he might not allow her to run to Sam’s Club to buy it.  He must first spend hours to research the best price online.  Then he must spend a couple hours driving to at least three different stores to see the selections and prices.  Then and only then can she go to Sam’s Club, where the best price and selection can generally be found,  to purchase the  item.  But on occasion he will find a much better deal and save money, and will forever remember those few occasions!  Ha ha!

5. He is very thorough.  Asking him to help you clean something 30 minutes before company is to arrive is not recommended.  He cannot take a vacuum and run it around the middle of the floor and put it away, even when he intends to.  He’ll start with the middle of the floor.  Then he’ll see something peeking out from under the couch.  As he goes to pick it up, he will see lots of things under the couch.  He must, therefore, move the couch and clean all the junk.  While he is gathering the toys, he’ll find a stain under the couch where a drink was spilled.  He will then begin working with stain remover…  That’s when your company arrives, with your entire living room torn apart and your husband knee deep in stain remover.

6. He is a problem solver.  He is not wired for talking about a problem. Fixing it is the only option.  If you just want someone to listen and empathize he needs to know that in advance.  Then he may still forget and tell you how to fix it.  If you just want a hug don’t tell him about your problem, just ask for the hug.  It cuts to the chase and THAT he understands!

8.  He is a bit absentminded.  It’s quite possible that he might lock his keys in his car three times say…the first week you return from your honeymoon.  He does not do it on purpose so cut him some slack.  The first time you might be all gushy and forgiving.  The second time, you might be a little surprised, but bail him out.  After the third time no one would blame you if you  purposely “lose” his keys so he has to ride the bus.

9. He loses track of time.  It would not be completely unusual for him to be an hour or two late because (refer to #1) he was so intent on his work that he forgot to go home.  Or maybe he could be so intent on studying for a test that he forgets to go and actually take the test!  Stranger things have happened right?

10.  He is your best friend!  Amid all the crazy things he KNOWS he can’t do life without you.  Your marriage is an adventure that you either  laugh or cry over, but find laughing is much more fun and lean heavily toward that end!