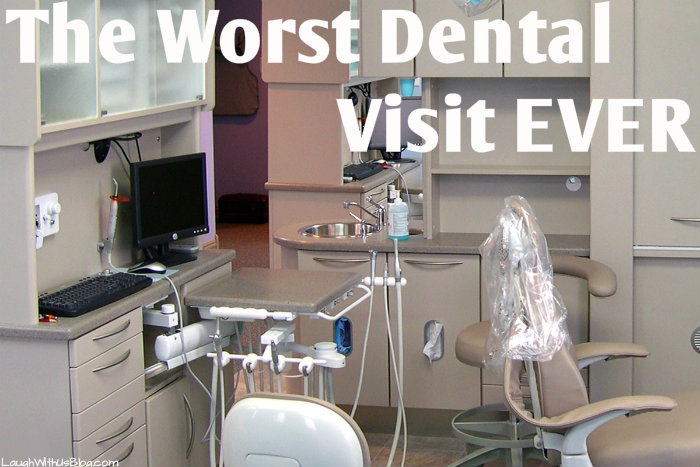 Shaking. I left the office shaking, but glad I was out. It was the worst experience I had EVER had at a dental office.

The next crazy thing that happened during this move was in finding a new dentist. Our insurance plan included one and only one dental office (and its 3 locations) in a hundred mile radius. I remember thinking that I sure hoped I liked it there, before I left the house.

As I waited at the office, the receptionist said, “This is the only dentist you can see in this office.” I didn’t really think much about it, but before I was called back she had said it three times. Not only was this the only office on my insurance, it was the only dentist that I could see.

I endured the x-rays, and then the dentist finally arrived. “Hmm” said the man, “you have a tooth missing.” He continued to look at the x-rays.

“Actually I have two missing.”

I didn’t argue, but every dentist I have ever seen always comments that I have a k-nine missing since evidently that’s very unusual.

He asked me if I was having any problems. I showed him the tooth that had been very sensitive. He didn’t see any problems with it in the x-rays he said, but it probably has a hairline crack. Since I have a filling on the tooth, he said we should remove the filling, do a root canal, and then crown it.

I was quite horrified. My tooth was sensitive so he wanted to do a root canal, even when he didn’t see any problems on the x-rays? But he didn’t stop there. Depending on how deep the crack was he said he may have to remove the tooth and do an implant!

He began talking to his assistant about each tooth as he went around. Again, he mentioned the missing tooth on the bottom, and omitted saying there was one missing on the top. “I have a k-nine missing on that side,” I told him.

“No, you don’t…er…uh..oh wow actually you do! That’s strange!” What I found strange was a dentist that couldn’t see a k-nine was missing. Oh well, I was just there to get my teeth cleaned.

Next he tried to sell me a night dental guard since there was evidence I grind my teeth. “Oh well I have retainers. My orthodontist said they would also function as a dental guard.” He questioned me further about it, and then reluctantly agreed that my retainers were probably sufficient.

He was finished with his exam and declared that I needed a root canal, a filling on another tooth, and needed not only a cleaning but a deep cleaning on one side of my mouth.

He walked out and his assistant printed out a list of costs for the entire thing. It was thousands of dollars that the insurance wouldn’t cover. To my horror it wasn’t just a list of costs, it was a bill that she was wanting me to pay right then! The dentist could do it all “Today” she said. What? Not only was he suggesting I needed all that work, he was wanting to do it all right then! He must have no other business!

I looked at the assistant and expressed my concern over the dentist talking root canals and implants when he didn’t even see anything wrong with the tooth. In a hushed voice she said that I could consult an endodotist who would have much better instruments to determine the problem!

Next she tried to sell me a $150 tooth brush. I wasn’t interested.

I told her I was out of time (They had kept me there over two hours already.) and that I’d just get the cleaning and come back for the filling.

She reprinted the bill for me to sign and PAY before they proceeded. I was being charged extra for the deep cleaning and…also for the filling! “Um, I’m not getting the filling today so why am I being charged for that?”

“Oh you can go ahead and pay today and that will be out of the way when you come back in.”

I could not believe what I was hearing. She wanted me to prepay for a filling that I would come back and do next month. It was madness!

I was becoming visibly agitated, and I could tell it was making her nervous too. “Listen, all I want to do today is what is covered by my insurance. Can I just get a regular cleaning?”

NO! They would not give me a cleaning unless I paid an extra $55.

By then I felt like it was all a scam. I was shaking uncontrollably. I told the lady to forget the cleaning and started to get up. She wouldn’t let me out until I signed about 15 papers.

If this was a brand new dentist right out of medical school with no experience, I sure didn’t want him experimenting on me with implants.

I was scared half to death! I ran out of there and don’t plan to ever return to that dentist or any other in that office.

Thankfully, after explaining to the insurance company what happened, they made an exception to allow us to switch insurance plans mid year. I’m told I can now choose my own dentist…if I get up enough courage to try. It’s the worst experience I’ve EVER had at a dental office.