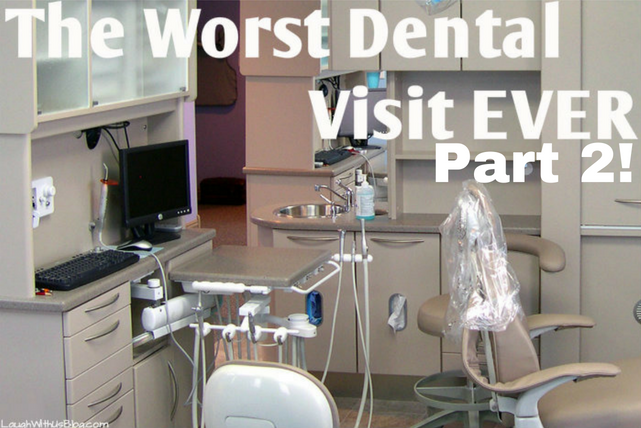 Oh the things that have happened since this great big move to south Texas! I’ve told only some of the craziness like the trouble we had finding a house, hospitalizations, cancer…and so much more. But the ongoing saga of trying to find a dentist… Y’all I wouldn’t believe it if it didn’t happen to me.

My story started with the WORST dentist experience of my life. If you don’t remember what happened, take a moment to read it. I’ve never run out of an office shaking like that. It was so crazy!

It was some time before I could force myself back to a dentist even when we were given a new insurance with more options. My husband Jason was overdue for his dental check-up, so he decided he would find a dentist for us.

He made an appointment to an office that came recommended. Mind you my husband has never had a cavity in his life, not one! The dentist told him he had…wait for it…23 cavities! My husband came home in shock. How had his teeth gone so bad so fast?

Meanwhile I finally found another dentist on a family recommendation. The kids and I had cleanings, and I was told I needed five cavities filled. Well I’ve had horrible teeth my whole life, and it didn’t sound unreasonable. At least the dentist wasn’t trying to give me an implant on the spot! So I made an appointment and had the work done.

After some time Jason once again decided to try another dentist. This dentist told him he had…will you believe?…zero cavities!!! Needless to say he’s sticking with this guy. Is it just us or is south Texas crawling with horrible dentists? Is it everywhere?

My story isn’t over. Jason told me to switch the kids and I to his new dentist. But since we all already had x-rays I thought we should go back for the follow up cleaning instead of all of us having to get new x-rays after six months. And there was another thing…one of my fillings had fallen off. Go ahead laugh. I talked to the office, and they would fix it for free, so I went ahead and scheduled us all back to this dentist.

Yesterday I went in for my visit and to have my filling redone. Here is what I found out: The dentist that had done the work on my teeth had been fired. Not one, but two of my fillings had come off.  Two of the other teeth he worked on were not done right either and my teeth were actually worse than when he did the fillings! One of the fillings that had fallen off could not be redone without a crown! The new dentist redid three of the fillings on my teeth for free, but says I need to come back for two crowns!!

It’s so horrible; it’s hilarious, no? I must be so special to be needing so many crowns. Ha!

So what do you think? Should I go back to this new dentist or switch to my husband’s dentist?