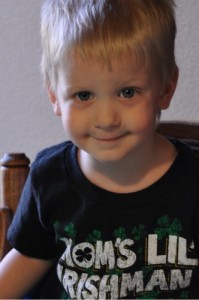 Tuesday Jason, Jr. woke me up at six a.m.  He had thrown up in his bed.  I cleaned him up and sat him on the kitchen floor while I found something to eat for breakfast.  He seemed to be content there, and I figured that if he threw up again at least it would be on the tile instead of the carpet.  I took my breakfast and sat on the couch in the living room, where I could be comfortable but still see little Jason.

A little while later my husband Jason came into the kitchen and began getting his things ready for work.  “Esther, I think he’s going to throw up!” He spoke so loud that it startled me.  I just nodded.  “No, really he’s going to up chuck,” he exclaimed, pointing and almost jumping in his panic.  “I’m serious, he’s about to upchuck right now!”

And that, my dear friends, is why God made mamas.  My husband is hands down the kids’ favorite, but when one of them is sick they want their mama.  Mama knows that every sick child needs a bowl, a towel, a cup of Sprite and some good old-fashioned cartoons on the television.

So I got to spend my day holding my little but growing boy all day long.  He is such a sweet, cuddly boy, and already he’d usually rather be running around than in his mother’s lap.  I hated to see him sick, but enjoyed every minute of holding him.

“There’s no great loss without some small gain.” Laura Ingalls Wilder (Little House on the Prairie)