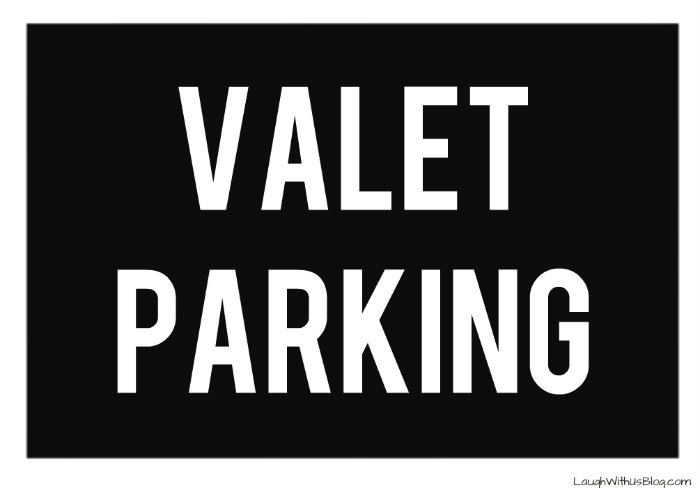 Parking.  Parking poses such a problem.  I think it should be against the law to charge for parking–for crying out loud. My husband avoids it at all cost.  (ha ha) He’s had me walk miles farther at nine months pregnant to save a few dollars.  Going out downtown with friends?  They’ll all have to wait while we find cheap parking and walk.  It doesn’t bother me anymore.  I just plan for it.

While my sister Sara was in Houston at the MD Anderson hospital, we took the family one weekend for a visit.  The first parking issue arose at the hotel.  Our high top conversion van would not fit in the hotel garage.  We could pay for valet parking or park on the street behind the hotel…in downtown Houston!  Jason was super excited.  He wouldn’t’ have to pay for parking!  I prayed no one would break into the van, granted it’s not much to look at and doesn’t yell out to thieves as they walk by, but you never know…right?  Sure enough the next morning the van was still there safe and sound.

Then we drove to the hospital.  We drove around and around and around that hospital looking for a place to park the high top van.  We could only find garages.  I didn’t want to walk the five miles my husband suggested and insisted that we go ahead and pay the valet.  It was the first time we have EVER paid a valet.  Insert smile here!  Wow we were stepping up in the world.  Then I obsessed about the things left in the van.  Would they still be there after handing our keys over?

We spent the entire day at the hospital.  It was so good to see my sister!  At the end of the day we went to the lobby and handed our valet ticket to the attendant.  “It will be right out,” we were told.  We waited outside in the chilly night air.  Five, ten, fifteen, twenty minutes went by.  There we still sat.  Several people had come and gone and we were still there.  “Honey, don’t you think we’ve been waiting a long time?” I finally asked.  Jason went to ask again about our van.  It was coming they assured us.  Another fifteen minutes went by.  This was a little ridiculous.  Again my husband went to ask.  We had been waiting about 40 minutes.  Finally, they started making some calls.  After about 10 minutes we received some news.  They couldn’t find our van.  They lost it.  What?  I was so tired, but it struck me so funny.  Our van was completely fine parked on the street in the back of the hotel in downtown Houston, but pay the valet, and they lose our van!  And not just any van, this thing sticks out.  I find it easily in any parking lot.  It towers above other vehicles and with a huge dent in the back, it’s unmistakable.

A little while later they came running that they found the van.  The attendant had, instead of putting the keys on the wall that marked the number of the parking spot, slipped our keys in his pocket!  We were lucky he didn’t go home for the night with them in his pocket.  Ha ha!

Oh well, our van was found and everything was fine.  You’d think they would have comped our valet ticket though, but nope they just said, “Sorry!”