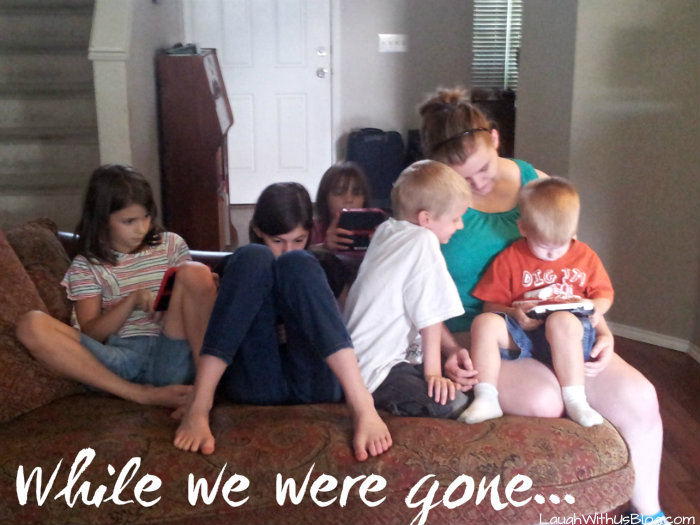 My niece Skylar Ashley flew in to stay with our children while we were to be gone on an Alaskan cruise.  She had some adventures of her own…you can imagine.  She was kind enough to send me some stories to share with you.  Her perspective and life with my five kids below:
When my aunt asked me to watch her little ones for her, I was all for it.  Her kids are great and I always have a blast with them.  I’d babysat for her before. How hard could it be, right?  Later on she mentioned it would be for ten days, which was a little more daunting.  Still, I wasn’t worried, not until about a week before my plane was set to leave, when she started giving me a list of all the things I ought to be aware of.  The kids being kids, that I had expected like fits and complaining and getting distracted and missing their parents.  I have younger siblings, so that was all expected.  It was other things that got to me, like the dogs. I hate dogs…. and they have two….
The day before they left, I was talking to my aunt and uncle about the things to remember to keep their children and myself safe.
1. Stay out of Mom and Dad’s room. Heed the yellow hazard tape across the door and stay away.
Check!
2. Never be late putting the baby down for his nap, and never EVER be late waking him up or else he won’t sleep at bedtime, so neither will anyone else.
Okay…. Double check!
3. Always, always lock all the doors at all times, and DON’T answer the door to strangers.
Check! Standard safety rules all parents teach their children. Ehehe, except they added the little detail that there had been break ins around the neighborhood and an incident (grant it, several years ago) of men coming to the door at 3 in the morning. That particular little nugget of information terrified me.
The next night was my first night alone with all the kids. I double and triple checked all the locks before going to bed. I laid quietly, listening to the silence.  After the nervousness of driving a strange car, cooking everyone dinner, herding five over-excited children to their rooms for pajamas and teeth brushed and bedtime, I passed out pretty quickly.  I slept soundly for about three hours… About two in the morning, a loud banging jerked me awake. The door rattled, and a minute later another bang shook the back door and the windows.  I sat straight up in bed and the only thing running through my mind was “Oh no! Someone’s breaking in!!”
As I pulled out my phone and began dialing 911, a gust of wind blew rain against the window… Then the room lit up with lightening… and a third bang followed, not quite as loud.
Rain… It was storming…!!!  Duh!
The next morning I asked the girls “Did the thunder wake you up last night?” They all gave me funny looks “What thunder?” Personally, I’d like to think none of them heard it because they all felt safe with me there, even if I wasn’t quite sure. Can anyone say confidence boost? Haha.