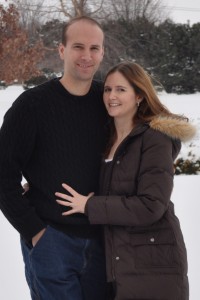 I had put forth extra effort and was so happy to finally get the kids to AWANA on time one  Sunday evening.  As we parted ways, Jason taking the older two and I taking the little two, I said with a wink, “Wouldn’t it be nice to go out?”

I left Grace and Jason Jr. at their classrooms and walked to the church foyer where Jason and I normally meet to go in together.  Not seeing Jason, I walked to the nursery to make sure the baby had stopped crying and then went back and waited in the foyer. “Hmm, that’s strange,” I thought. “Jason is usually waiting for me when I get here.”  I wondered what would be keeping him.

I decided to try the church library and then the bookstore, since he is usually one of those places when I can’t find him.  He was neither place.  I was beginning to feel uneasy.  Finally, I decided to go sit in the sanctuary to wait for him.  It was still early, so the worship team was practicing.  I looked up expectantly every time someone walked by.

Then it occurred to me that maybe he took me seriously when I said it would be nice to go out.  What if he was waiting for me in the van? I grabbed my purse and walked out to the parking lot.  I drive a high top conversion van that usually towers above most other family rides, so I noticed right away that the van was gone.  I walked around a little anyway, but I knew where we had parked, and the van was nowhere to be seen.  “Maybe he decided to pull around and pick me up” was my next unlikely thought, so I walked all the way to the front of the church and back, but still no sign of Jason or my van.

It had been fifteen minutes since I last saw him and I kept trying to think of things that could be keeping him.  Maybe he was just talking to someone.  I went back to wait in the sanctuary.  People were starting to fill the pews now and still no Jason.  Again I walked out to the parking lot and then back to the front of the building.  Jason has never, ever left without me or without telling me, not even in anger, so I could not imagine what had become of him.  I kept telling myself that there had to be a logical explanation, but could not think of one.  It was so out of character for him to have left willingly without telling me that I started to believe that for sure some how he must have left unwillingly. . . . I was beginning to panic, and I confess I really found it difficult even to pray.  I could think of nothing but, “Oh, please let him be okay, please let him be ok, please let him be ok.” You get the idea.

Standing in the parking lot, I decided to go see if he checked Joy into her SPARKS class.  Trembling I walked to the building and stopped short when I got there.  The building was full of people and the sign on the door said that SPARKS was meeting in the south building that evening.  Whew, I was glad that I hadn’t walked into a service in progress.

When I got to the South building, however, I couldn’t find anyone.  Convincing myself that Joy HAD to be safely with her class, wherever that was, I told myself to get a grip and just go to church.  At least I would be where Jason was most likely to look for me.  I couldn’t resist making one more tour around the parking lot and once again staring at the spot where the van had been.

The service had started as I once again sat in the back pew.  I couldn’t sing.  I knew that if I opened my mouth I would no longer be able to suppress the sob that kept threatening to rise in my throat.  Where was my husband?  Would I ever see him again?  How would I get home?  What would I tell the kids?  How would I make people believe that he hadn’t left willingly?  It was forty-five minutes since I had last seen him.

Suddenly he walked through the door and sat beside me.  I couldn’t look at him.  “Are you ok?” he asked me.  “No,” I replied as tears ran down my face.  If I hadn’t been so happy to see him, I could have killed him.  I had a new understanding of the cliché!

Jason whispered that he had walked with the girls to sign Joy in for SPARKS and found that where they usually meet, Faith’s Truth and Training class was having their annual wooden car Grand Prix race.  Faith was immediately upset that she wasn’t going to be able to race because we hadn’t brought her car.  Jason dropped everything, ran to the van, drove home to get Faith’s car, and rushed back just in time to get her in on the races.  Ah, my hero!

Tears streamed down my face as we walked to see the races.  I was immensely relieved that Jason was back, but I still felt numb and trembley and had a very hard time enjoying the race at all.  As we sat there watching, Jason suddenly said, “I’ll be right back—I need to go check on Joy.”

“What’s the matter with Joy?” I asked.

“I need to make sure she got to her class.”

“Didn’t you take her to her class?”

“No, I just left to get Faith’s car.”  I had to laugh.  That was one piece of information that I was glad I hadn’t discovered while he was gone.  I think I would have dialed 911 on the spot!  Fortunately, she got to her class on her own.

Jason was very kind, apologetic, and patient in answering all of my incredulous questions.  My last question to him was, “So, if I had left without a word to run home to get something for the kids, would you have been angry?”

He smiled sheepishly.  “Yeah, I probably would have,” was his honest reply that melted my heart.  Here was a perfect example of how a soft answer turns away wrath. Well, Jason was fine, Faith got to race her car, Joy somehow made it to her class, and I gained a new appreciation for my husband, so all was well!