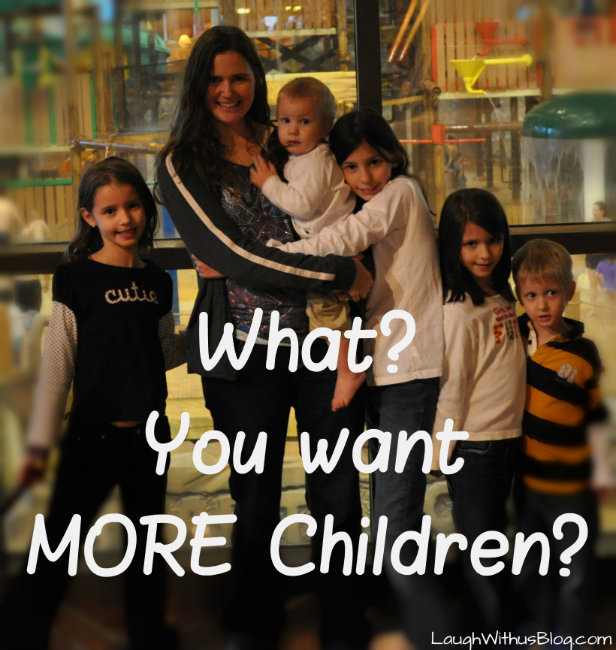 What? You want more children?  That is the question, isn’t it, for any family that has more than two or three?  Some people ask it out loud and aghast while others are just pleasantly curious.  Though some argue that it’s none of anyone’s business, personally, the questions don’t bother me.  I’m pretty inquisitive myself, and I feel that tactfully asked questions show you care.

From the time that we were married my husband and I both wanted four.  He came from a family with four children and so did I.  It seemed like the perfect number.  We were in complete agreement until I had my third child and almost died mind you and my husband offhandedly threw out the comment, “You know I think you have time to crank out two more.”  Now I can’t be sure that was his exact wording.  He may argue.  But that’s how I remember it.  At first I thought it was a sick joke, but he was serious.  “Are you TRYING to kill me?” I asked him.  And that has been a running joke ever since.

So after we had our fourth, my husband kept saying, “Wouldn’t it be nice to have another boy so Little Jason isn’t alone?”  Never mind that I couldn’t guarantee a boy!  I lost a baby after that, and then the Lord blessed us with my husband’s heart’s desire, another boy.  I thought we were done.  I thought that five surely would be all.  Then my husband’s tune changed to, “Wouldn’t it be neat to have another boy and have three girls and three boys?”  As you know we recently experienced another miscarriage.

So the question remains, Do we want more children?  Yes!  It’s not that we don’t believe in birth control, although my husband tends to lean more to that side of the issue than I do, but we believe that children are a blessing.  How could I not want another little Irish kiddo running around my house?  And so, should the Lord bless us with another child, we will rejoice.  If He doesn’t, we are content.  If I should experience another miscarriage, then He will give me the grace I need when the time comes.  And “If I perish, I perish.”  🙂