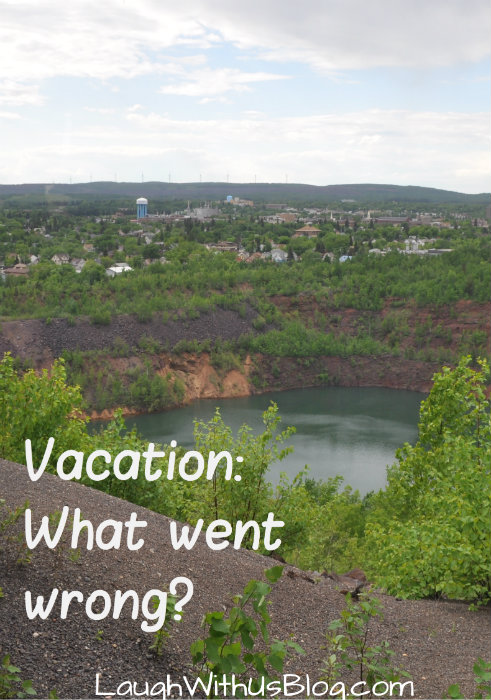 We had so much fun in Minnesota and Nebraska visiting family and doing a little touring.  On a road trip of over a week with a family of seven something ALWAYS goes wrong.  It’s ironic that those moments are seldom fun to live through, but always seem to be the moments that get retold and laughed over for years to come.  So I guess we wouldn’t want a road trip without trouble right?  Ahem!

My biggest regret is that we lost three pair of Crocs on the trip.  They got left at a hotel.  Crocks are the BEST summer shoes for our family and to lose three pair at one whack hurts.  I still feel sick to think about it.  We’ve yet to replace them so I’m reminded of it quite often.  Wa wa wa!

Our GPS did not work properly on the northern Minnesota country roads.  We had the worst time getting from town to my brother’s house.  The first time it took us on this huge loop around a lake and back to his house.  Though we left around the same time as the rest of our family we arrived about 20 minutes later.  That was fine.  My little boy got a nap and we enjoyed the gorgeous scenery.

The next time we tried to get to my brother’s house, however, was not so pleasant.  It was a half hour past when we should have arrived, and we were still driving in circles.  The GPS took us to several dead ends.  One time we drove up to a cliff.  The GPS kept saying, “Follow route” straight over the cliff.  Then we ended up at a dead end on some little dirt road.  My family was waiting for us to eat lunch, and I was getting REALLY perturbed.  Stopping to get directions or calling my family for help was anathema!  Ha ha.  Finally, my sister called to check on us.  When I told them where we were I could hear my whole family die laughing.  They tried to help us, but we didn’t have a map and as previously noted the GPS was no help.  Finally, when I told my brother a place that we had just passed he said, “Stop right there!  I’ll come and get you.”  We did thankfully in spite of my husband’s grumbling that he could have found it.  Ha ha!  Come on y’all.  I know some of you have been there!

My most embarrassing moment of the trip came when I was talking to some ladies and told them that I knew a lady that has had three hysterectomies. The looks on their faces… It was obviously a different surgery my mind was thinking, but my mouth insists on embarrassing me. I still laugh out loud every time I think of it.

And well you can’t have a road trip without someone throwing up in the van right?  All twelve hours home my poor little Joy was so, so sick.  To our huge relief she was either able to find a sack or we were able to pull over, and we didn’t end up with a mess as we have in the past!  Good times!  🙂