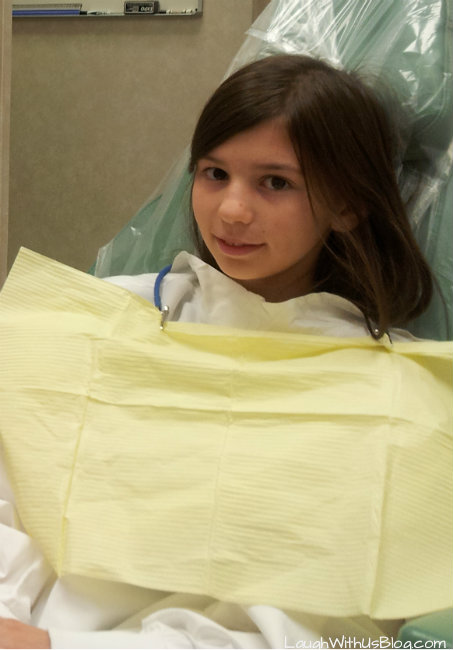 It’s been a couple of months ago now since I first told you about all of our teeth issues and the looming decisions that we were needing to make.  Wow, it’s been hard to get school work done this year because we’re spending so much time at dentist, endodontist, and orthodontist appointment, not to mention doctor’s appointments.  It’s exhausting!

First of all, what has been going on with Faith’s poor tooth.  For a while we were sent back and forth between the dentist and the endodontist.  Neither one of them wanted to remove the faulty crown to deal with what was underneath it.  Finally, the dentist agreed to tackle it.  Once she removed the crown and the decay we had half of a tooth.  It’s heartbreaking to think that her tooth would have been much better off had we not crowned it in the first place.  Sometimes we trust the experts, and sometimes they are wrong.  Nevertheless here we are.  With fifty percent of her tooth left the dentist gave it a fifty fifty chance at surviving with a root canal.

The root canal was a two phase deal for her since the infection was extensive, but she did amazingly well.  The endodontist said she went through the process, “Better than most adults.”  She completed the root canal, went back to the dentist for the crown, and we just saw the dentist again on Friday for a check up and ex-ray to evaluate the crown.  The ex-ray still shows much infection.  We will see the endodontist again in six months for the final say about the survival of her tooth.

At the same time I and the two older girls have been evaluated by orthodontists as well.  I told you several months ago about how my front teeth had begun to go sideways and how I was considering Invisalign.  I consulted with two orthodontists and both of them told me the exact same thing.  I am not a good candidate for Invisalign.  I was disappointed!  So after much thought, agony, and prayer over the decision we decided to move forward with me getting…braces!  I can’t believe that after all those years of braces that I’ll be doing it again.  The fact that our insurance covers a huge portion was a deciding factor in our decision to go ahead.  Through the ups and downs of my husband’s new job,  I’m thankful at least for the insurance that covers even adult orthodontics.  Yea!  So, Lord willing next week I’ll once again be in braces.  Crazy!  Faith and Joy will also begin the process for braces next week, but it will take a few more weeks before theirs are on.  Again, I’m so thankful that though the girls have my genes for bad teeth we have great insurance.  What a blessing!