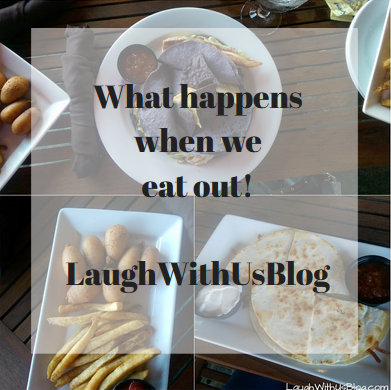 Last weekend Jason and I took the kids to one of those fun family gaming restaurants.  We had never been there before, but there was a grand opening in our area and we had received some great coupons for games, so we decided to try it out.  We’re always looking for great, clean, family entertainment.

You know how bizarre things just seem to follow us, so what happened at this place won’t surprise you, but it did surprise my husband.

We decided to eat first and play after the meal.  We situated our little ones in strategic positions as only a family with more than four kids understands!  Then we looked at the menu and tried to plan our order. We placed our drink order and continued to decide on what fabulous concoction we would try.

Our server came with our tray of seven drinks all balanced in one hand.  Now with so many kids I have no idea why they didn’t give us any kid cups with lids.  The drinks were all full fledged adult size beverages.  Now at our home table we spill at least three drinks every meal.  I mean we just count on it, no biggie!  This day however was a record!  Our server brought the tray of drinks down almost to table level ready to begin dispersing them when then the strangest thing happened.  The tray must have tilted just a little and one glass tottered.  It was as if in slow motion.  In her effort to balance the other drinks the tray went this way, then that way, and like dominoes all seven drinks went crashing…all over my dear husband–right in his lap!

Jason who had been studying the menu received quite the shock.  The poor server was so embarrassed and apologized profusely.  The kids cheered! “Best water ride ever,” called out my six year old.  We all laughed and assured the waitress it was ok and that we were used to spills.  Has this ever happened to you?

We were moved to a different table, ordered, ate and received the ticket.  Now if you were me would you have expected a discount or complimentary item, something?  Judging by how we are normally treated when there is a problem, I did think they would do something.  Give us our drinks free, a complimentary dessert, hey a free game card!  But nope, nothing, nada, zilch.  I suppose we were so nice about it, they figured they didn’t have to do anything.  But don’t you think that if we had complained, yelled, gotten mad etc they would have done something for us?  Ah well.  I’m still glad we didn’t make the server feel bad, but in my opinion good business would require some kind token.  What do you think?