We spent seven nights at our awesome cottage at Stormy Point Village, but there was more we wanted to do and we had the time.  It wasn’t an option to add another day, so our final day of vacation before the trip home we got up and packed the van, vacating our much loved home away from home.

After that we had some time to explore Branson before our 4:00 pm dinner cruise on the Showboat Branson Belle.  We hadn’t really eaten breakfast since it was a rush to get everyone and everything out of the cottage in time for the 10:00 check out.  We decided to go out for a small brunch so that we would still be hungry for the dinner cruise. 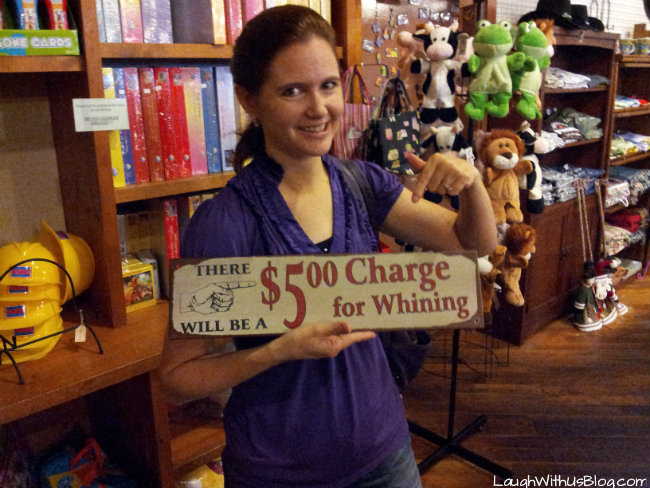 As we drove around Jason chose a Bob Evans.  I had never been to one, but Jason remembered it from when he was a kid.  I liked what I saw right away when we walked in.  There was a bit of a wait, but the country store was fun to browse.  I liked this sign I found, but later as I thought about my experience in the restaurant, I thought it was hilarious.

We walked around the store until they called our name to be seated.  We weren’t that hungry, so we only ordered a couple of meals to share–pancakes.  We thought they would make all the kids happy!  Well, we waited, and we waited, and then we waited some more. 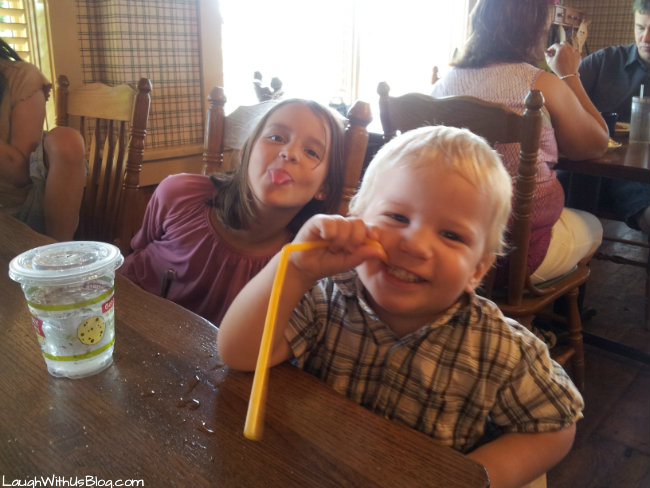 The most challenging was keeping Bobby happy, but I did my best to keep him entertained and the rest of the kids didn’t complain too much…at first. 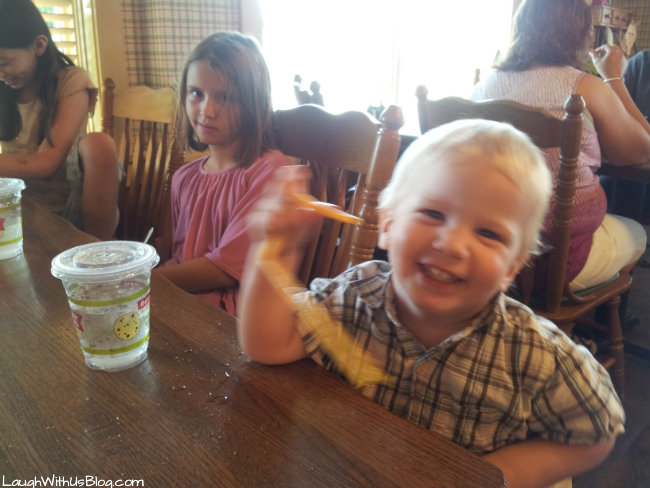 As we looked around, we realized that everyone that had come in about the same time we did had already eaten and left.  In fact there were several people that came in much later than we did and were almost finished eating.

Our server came by and told us that our food would be coming soon.  “It takes a long time to cook pancakes!” she said.  How I have laughed over that statement.

I was at wits end to keep the kids occupied.  I actually got out of my chair and started playing Goldilocks.  I would sit on each kid and say, “This chair is too soft,”  and so on.

An elderly couple sitting close to our table motioned me over and commented that we had been waiting along time.  The man had noticed the waitress come over and asked me what she had said.  “It takes a long time to cook pancakes!” I repeated stifling laughter.  The man got so mad.  He stood up, and told me that this was not right.  He was a local he said and that this was just plain wrong.  He stomped off telling me he was going to talk to the manager.  I was kind of shocked.  I guess you know it’s bad when the people around are getting mad for you!  Ha ha.

Then I noticed other families looking over at us, pointing and shaking their heads while speaking to their servers.  Another couple close to us started talking to us too, and we all laughed about how long we had been waiting there.  It had been over an hour since we ordered our food and one hour and forty five minutes since we had entered the restaurant!

The server finally came over and told me that our order had gotten lost.  Those in the kitchen had never received it!  I get it.  Things like this happen.  Thankfully, we weren’t in a huge hurry that morning and our kids were on their best behavior.

The manager came over and made a quick apology stating that our breakfast would be taken care of.  That was nice of them.  We received our two meals that we shared then about two hours after arriving.  Oh well…pancakes take a long time to cook!  😉

The food was good.  Though our experience was a little crazy, I would like to go back sometime!