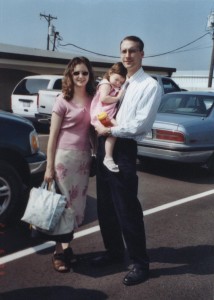 Several years ago when our oldest was a baby, Jason purchased about fifty dollars’ worth of shirts and jeans and took them home to try on since Sam’s Club does not have dressing rooms.  The next morning we got in the car to return most of them to get our money back.   When we arrived at the store,  Jason could not find the bag of items to return.  Then I saw he looked kind of sick.  “I left them on top of the car…”   We back tracked everywhere, but some one had already found them and taken them.  Jason was quite upset over the loss of money.  I felt very bad for him, so I was really understanding and sweet over the loss.  This turned out to be providential.

Two weeks later we went and filled out all the paper work to refinance our house with our one-year-old baby in tow.  We were extremely relieved when we finally finished.  I carried the baby and all the paper work out to the car.  In order to open the door, I put the three-inch-thick stack of papers containing all of our personal information on top of the car.  And, you guessed it, I forgot it!  We didn’t notice until we were on the interstate and my husband saw paper flying around.  “Esther, where is the paperwork?”  The expression on my face told all.  He slammed on the breaks, pulled over, and ran like a wild man all over the interstate picking up the precious papers.  I watched.  I laughed.  When he got back in the car, he was furious.  Unfortunately, I could not stop laughing as I remembered the sight of him running wildly all over the interstate trying to collect the papers.  My laughing did not help matters one bit!  Finally I said, “Uh, Jason, you remember two weeks ago . . . you know the Sam’s clothes . . . .”  He got a funny look on his face as it dawned on him that he had very recently made the exact same mistake as I had, and he also had to have remembered how very kind and understanding I had been, because his anger vanished.  I was never so glad that I had done the right thing.

(As always posts about my husband are posted with his permission!)