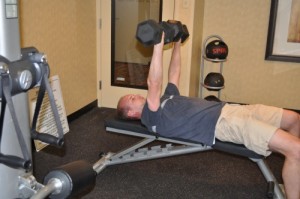 My husband finished his last final for his last class toward his master’s degree a couple of weeks ago.  We are all a little dazed.  Is it really over?  All five years of hard work?  Nevertheless it’s true!

Those last few weeks were very stressful for him.  He ended up having something go wrong at work right in the middle of  preparing for his final presentation and exam.  So amid this tense time he gave up his morning exercise and weightlifting.  There just wasn’t enough time in a day.

The week after he finished his class he once again resumed his weightlifting schedule.  Though he swears he did the lightest segment, still he could barley move the next day.  Not that big a deal, except in two days was his first softball game of the season and the very next morning after that he was going on an overnight golf trip.

“No problem,” he told me.  “I’ll just take three shots of No Explode!”  The vitamin powder evidentally is designed to help sore muscles.  He took one scoop that morning and two scoops right before he left for the game.

I decided to keep the kids home that day because it was a late game and my toddler didn’t get a nap and was really cranky.

Jason staggered in the door later that night.  “I don’t feel so good.  I’m dizzy.  My muscles feel like jelly.”

“No problem.  Just take three shots of No Explode!”  I winked.  Leave it to me!

He sat and groaned for a long time.  I asked if he had packed for his golf trip.  He hadn’t.  “It’s late and you have to leave early.  Don’t you think you should get started?”  He still had to find his golf clubs he said.

He finally made it to the attic and started yelling, “Are you just going to let me die up here?”

Poor guy I was laughing so hard all the while thinking, “Yeah I’ll just take three shots of No Explode!”

Somehow he finally got things together and went to bed.

“It’s moldy!”  Okay so I need to do a better job of keeping up with the cleaning, but certainly that was not the time!

About a half hour later, he woke me up again.  I heard what sounded like someone rattling a paper sack for about five minutes straight.  This time I got out of bed.  “Are you kidding me?”  I gawked when I saw what he was doing.

“Didn’t you ask me to open the dog food?”

When I got up the next morning he was gone.  I wondered the whole day if he had lived.  His cell was off.  He finally called the next day right before he got home.  When I asked him about the middle of the night madness, he hardly remembered it.

I don’t think he’ll be taking three shots of No Explode again any time soon, but I sure got a great laugh over the whole thing!