Yesterday a woman died at Six Flags.  We were there!  Jason had taken the day off work.  We were thinking that on a Friday the park would be less busy than on Saturday.  Wow.  I don’t know if this is a busy time of year or what, but the park was the most crowded we had ever seen it.  It was hot.  Still, when the kids are having fun they don’t seem to notice the heat.  We kept water close and trudged through the morning. 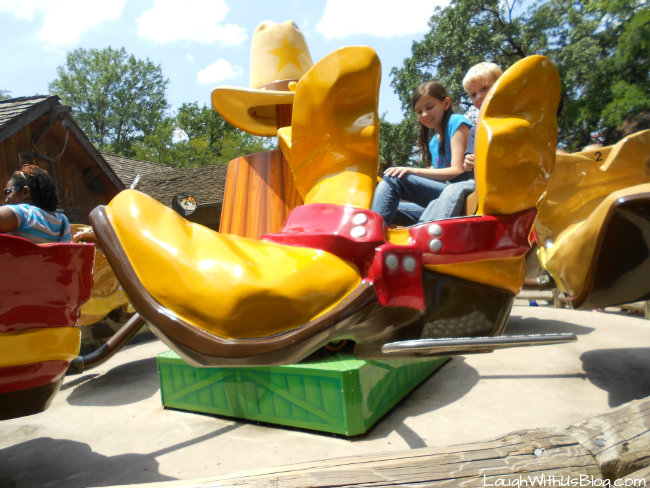 I had the most fun watching Little Jason enjoy the park this year.  He was just over the 42″ mark allowing him to ride so much more than last year.  He loved every minute of the day.  I’ve never seen him smile so much or exclaim things like, “This is so fun!” over and over.  Last year we had a hard time getting him to ride the kiddie rides he was so scared.  This year he thrived on roller coasters! 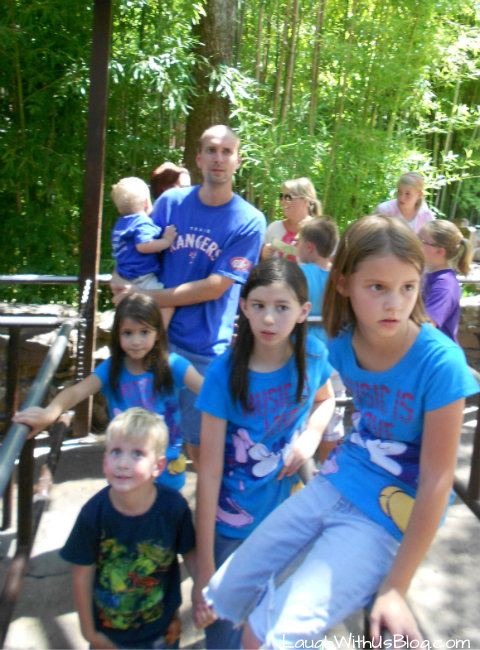 We rode and then we stood in line. 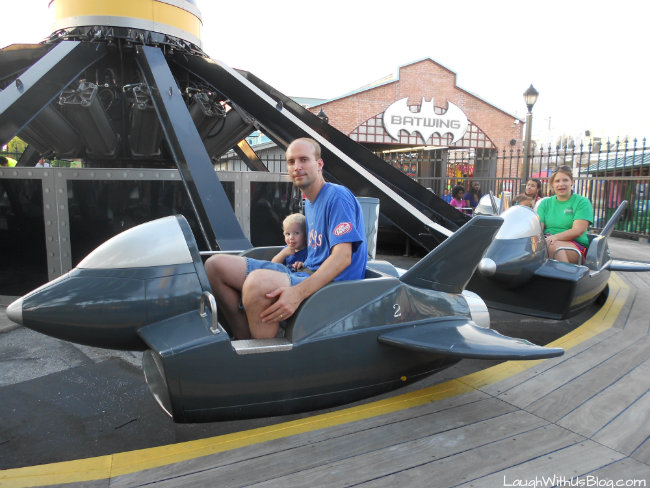 And then we rode some more.  Jason and I took turns riding the roller coasters, including the Texas Giant, while the other stayed with the baby.

At about two in the afternoon we were all hot and hungry.  We walked back to the car and drove to a nearby restaurant.  It was nice to cool down away from the crowds.  Then we went back to the park.  As soon as we got to the first roller the bigger rides all shut down.  Apparently there was lightening withing 15 miles of the park, though we never saw any lightening or rain.  We were disappointed, but took advantage of the time.  I held Bobby and let him take a nap while the others caught some rides that were still open.  This temporary shut down must have sent lots of people home, however, because when the rides started working again there were no lines and the crowds had thinned considerably.  The shut down turned out to be a blessing! 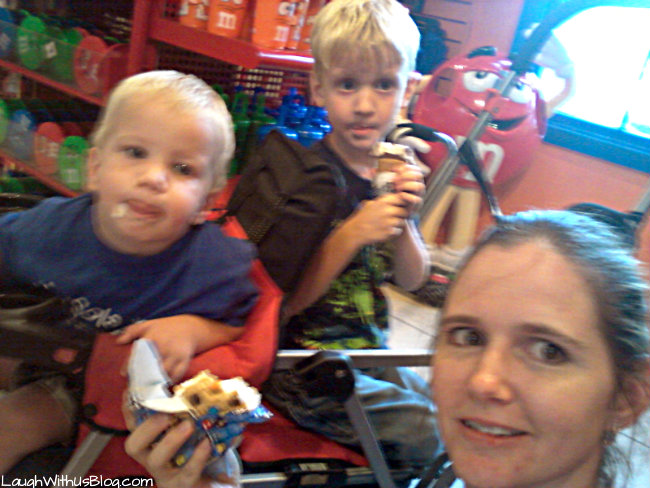 This is how we stayed cool while the others enjoyed some rides.  Kind of a creepy photo huh.  My head!  🙂 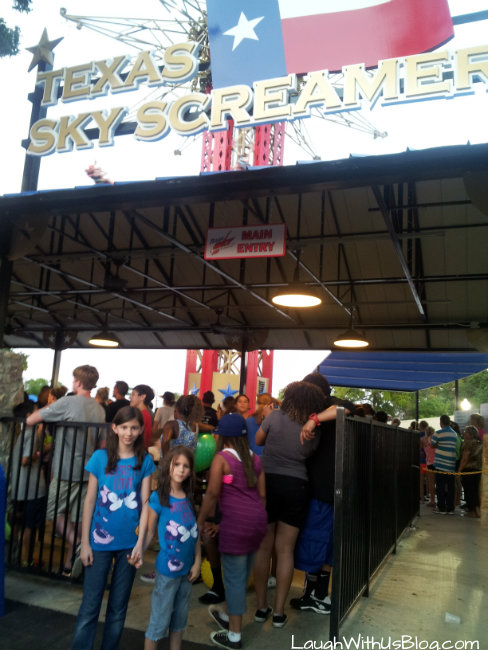 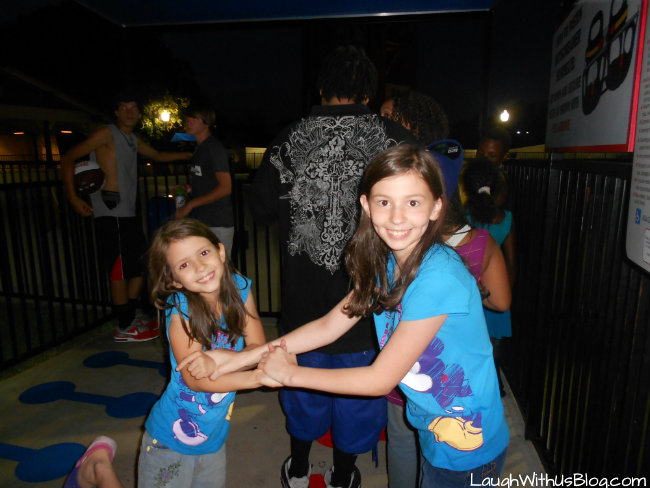 By the time they got to the front of the line they were a bit giddy! 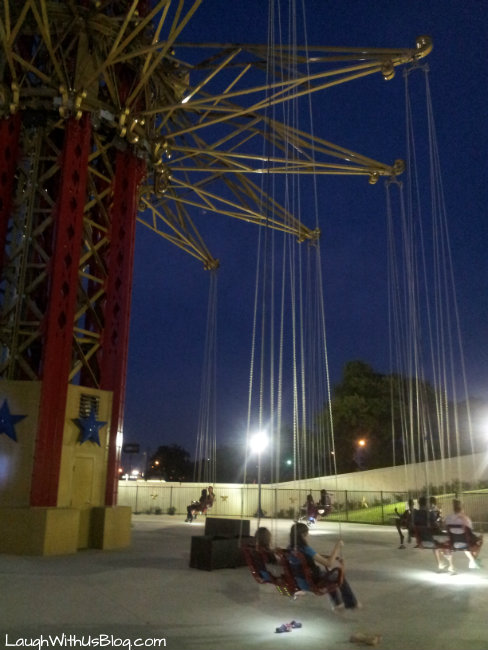 Strapped in and ready to go!! 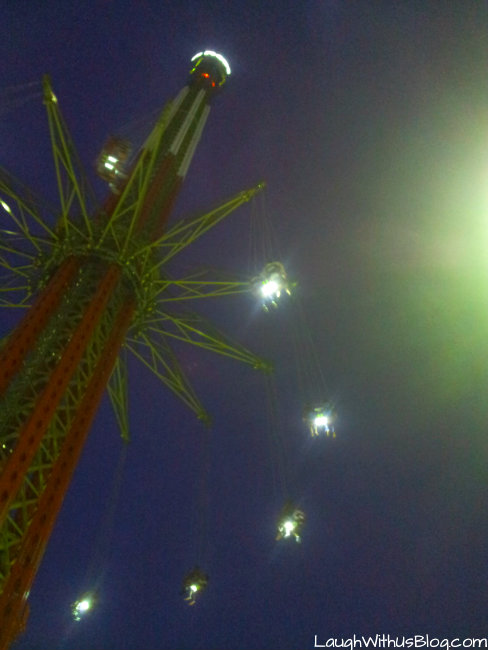 Up, up, up went my girlies!  At 400 feet high it is the tallest swing ride in the world!  My girls came off all smiles, “That was awesome!”  They can’t wait to go again.

Then we walked around a little while and put the little kids on a kiddie ride.  It was then that, as I sat talking to a lady also waiting for her kids, I heard the news of the lady that died.  We were not in the section where it happened and didn’t find out about it until later.  What was told me at the park was that a lady had fallen off the Texas Giant when her safety rail malfunctioned.  I was told it was supposed to have clicked twice, but it only clicked once, and that when she went around a curve it opened, and she flew out.  She fell to her death into a wooded area.  The woman was a mother who was riding with her children.  (This is not the official ruling of what happened, only what was told by word of mouth around the park.)

I can’t tell you how unnerving it felt knowing my husband and daughter had been on that ride earlier in the day.  It could have been one of them!  We all felt a little sick after that and just made our way to the car.  Jason, who had exited every roller coaster saying, “That was scary.  I just kept thinking one of the kids was going to fly out,” really took the news hard.  There were many, “I’m never going to ride a roller coaster again,” comments.  And I completely understand the feeling, especially having been there.  This death is tragic.  I feel for the family.  My children were crying thinking what if it had been me.  I think Jason was a little offended being that he was the one that rode the coaster!  🙂

Let us not over react though.  According to Wikipedia there have been two deaths at Six Flags over Texas…ever!  And that was including the death that occurred last night.   The statistics look much better than riding a bike, car, train, plane or hey, taking the kids swimming.  I, for one, will be riding roller coasters again soon, and I hope my family will be riding with me!