Our Valentine countdown is well underway. February first we put up our tree. On the second I took a little square Valentine chocolate and hurled it under each one’s door during quiet time. They are not allowed to have candy in their rooms so it was a big deal–all I need is mice up there! I sent the first piece of candy sailing into the room and scared Joy, maybe she thought it was a mouse at first. I worried that maybe the kids might not see the candy sliding under the door, but each one squealed with delight. This was especially fun for me!

On the third of February I set out to make Rice Krispi hearts. I have made Rice Krispi treats as long as I remember. You can’t mess them up right? Wrong! I guess I’m on a roll here so why stop now! With ruining the Christmas turkey, the cheese fondue on New Years, and now the Rice Krispi treats, can I turn in my apron?

The first batch I burned the marshmallows. I’ve never seen anything like it. They turned brown and hard and I thought I’d never get the bowl clean! I only had enough marshmallows left to try a half batch. I didn’t completely burn it this time, but…let’s just say there’s no way we were going to get hearts out of this! I smashed what there was down on the pan and we all stared at it. Finally I just broke a piece off and handed it to Faith. “It’s good mom.” One and then another grabbed a piece and declared it yummy. 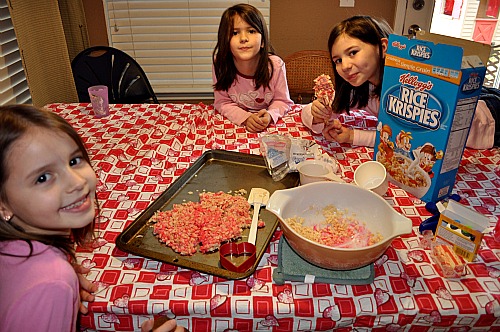 “We’ll call it the Valentine blob. You can put this on your blog mom!”

It’s the thought that counts right? And the laughs–they count too!  Well, at least I didn’t set any thing on fire this time huh?  😉