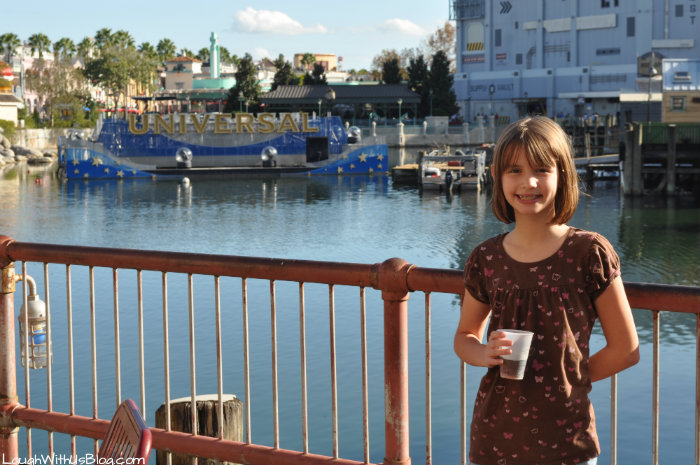 On day three of my little boy being sick we thought for sure this time he would be fine, and we made it to Universal Studios Florida!  Poor little guy!  He hadn’t thrown up any more nor had he been running a fever, but he just curled up in the stroller and fell  asleep.  I went to guest services and told them of our predicament.  I asked if it would be possible to acquire a stroller as a wheelchair pass so that we wouldn’t have to get him in and out of the stroller at every attraction, but could just roll him in and let him rest.  They graciously gave us the pass.  This was awesome!  He could sleep when he felt like it, but when awake he could enjoy the shows and rides without having to get out and walk around.  He spent the day in the stroller and still was able to enjoy the park. 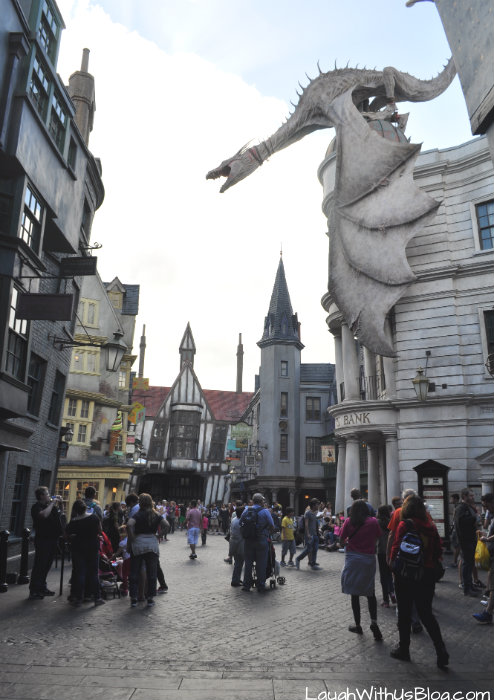 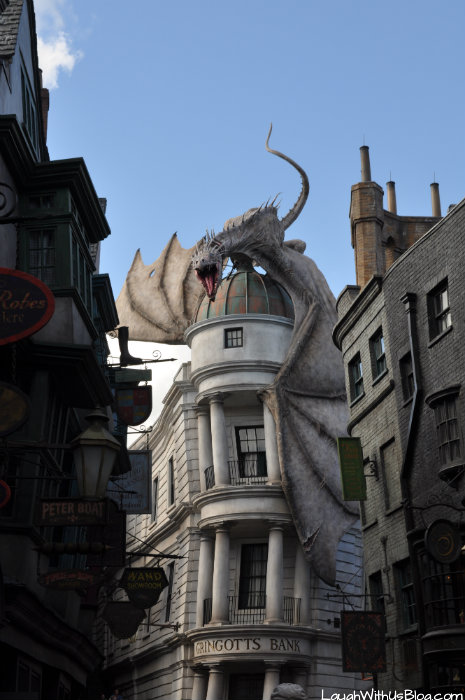 My daughter Faith especially loves dragons, and was excited to see the dragon over Gringott’s Bank. 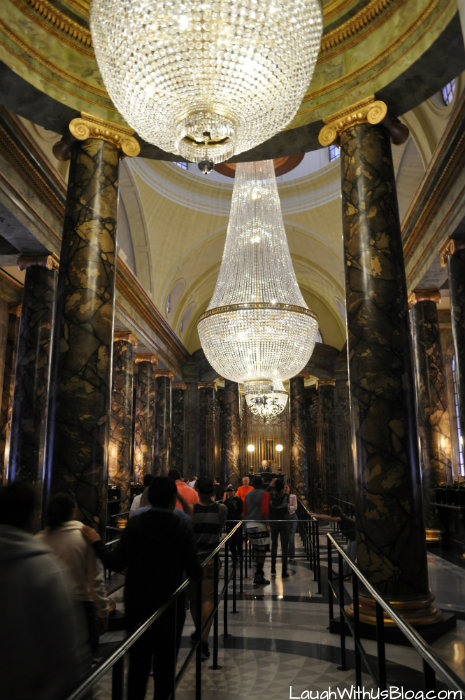 Harry Potter and the Escape from Gringott’s is an amazing ride.  It is in the style of our beloved Spiderman Ride at Islands of Adventure. 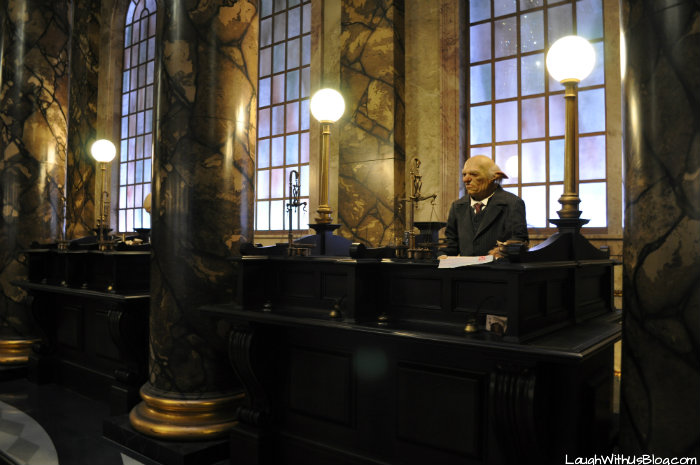 Standing in line for a ride has never been so picturesque! 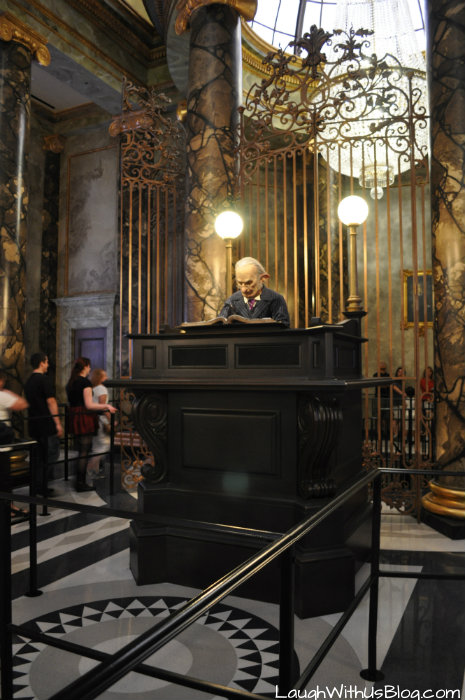 This thrill ride puts you right in the middle of the action as you navigate your way through the hazards of the Gringotts vaults finding Harry, Ron, and Hermione along the way!  It is spectacular! 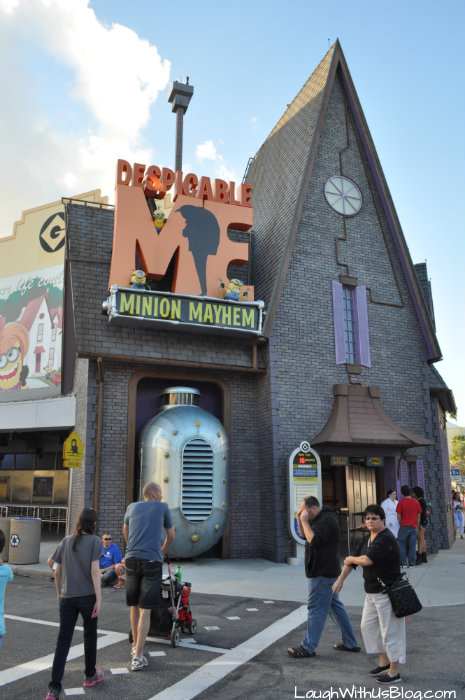 There are so many amazing attractions at Universal Studios Florida, but I would be remiss not to mention Despicable Me Minion Mayhem 3D ride.  As tired as Little Jason was, he still remembers and talks about “the Minion ride”!  Fun, fun, fun! 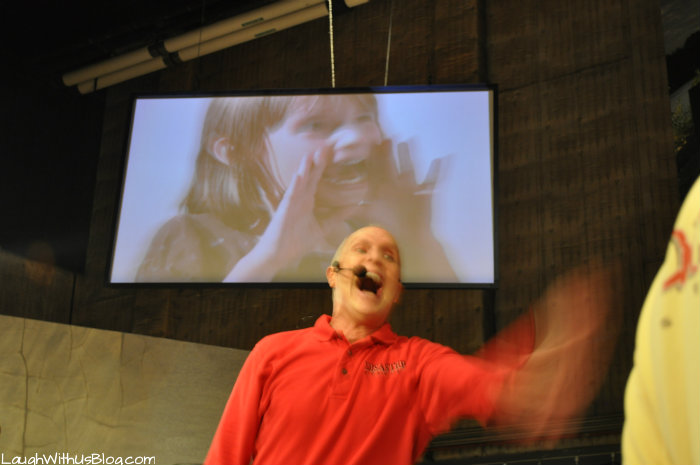 Disaster is in all of my kids top 3 favorite Universal Studio attractions.  Here you are taken through what it is like to make a movie, actually getting to be a part of it.  Joy volunteered her scary blood curdling scream and rocked the house.  At the end you are put on a train derailment and filmed as part of the movie.  The kids loved this!

There were so many favorite rides here from Transformers, Men in Black, Shrek, E.T, Terminator and more.  We purchased “Buy 2 days get the 3rd day free” tickets and chose to use our 3rd day at Universal Studios.

The entire day was completely perfect…until the ride home however, when three-year-old Bobby proclaimed from the back of the van, “I throw up.  Yuck.”  Sure enough.  We were never so glad to be in that awesome condo with its own washer and dryer.  It was absolutely no trouble at all to take the car seat out and wash it.  Putting all the kids to bed that night, we wondered what the night and next day had in store for us, but surprisingly all the kids slept all night and Bobby woke up bouncing around and hungry.  He was completely fine!

We then spent a wonderful day at Busch Gardens.  That night I once again woke up to a sick child.  This time the tummy bug hit Joy.  She was up all night and I knew I wasn’t going anywhere the next day.  It was our last Universal day and I stayed at the condo with Joy and Little Jason and sent Jason with the other three with fear and trembling.  With him by himself I was worried that he would lose them.  He can be so easily distracted!  Sure enough he lost the girls toward the end of the night, though it wasn’t exactly his fault.  He had called me to tell me he was coming back after this one last ride.  Ha.  The girls came out at the wrong place and couldn’t find him.  It took them over 15 minutes, but finally some nice lady directed them to their father.  Whew I was so glad it was Faith and Grace and not one of the little ones.

And oh my, the trip home!  We stopped to see my niece in Florida and planned to get a hotel some time that evening.  The few hotels we tried didn’t work out so Jason decided he would drive all night, and he did!  We have never done such a thing before as he falls asleep at the wheel.  You can imagine how petrified I was all night, but he drank several Red Bulls and was wide awake.  We arrived home safe and sound at 5:30 in the morning!

You know in spite of all that went wrong on this trip we had a wonderful time.  I remember it as a great vacation.  Probably more than any other vacation, we all got along and cooperated well with each other.  Great memories!

So where are we off to next?  I’ve actually got some really exciting news…