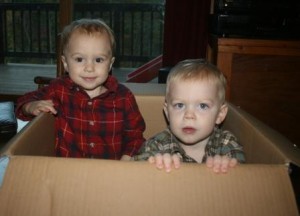 I’ve long been a fan of Laugh With Us Blog, so when Esther mentioned she needed some guest posts for her maternity leave, I was more than happy to help out.  Esther – I hope you are enjoying those baby snuggles right now!

I have two year old twins and a five year old, all boys.  I had a lot of different emotions over finding out that I was pregnant with twins, but one thing that never occurred to me was how fascinating their relationship dynamics would be.  Cort and Reid are as fraternal as they come – different colored eyes, different blood types, different sizes and different personalities.  But yet they are the best of friends.  They play independently, but in the same room, always aware of one another.  They play parallel, side by side, sometimes nicely and sometimes a bit rough and tumble.  And through it all, I watch, enthralled by their interactions.

Recently, I was asked to substitute at the little church preschool they attend two mornings a week.  There are just 6 students in their class, so Cort and Reid make up 1/3rd of the class.  Cort was coming off of a rough weekend (teething?) and wouldn’t let me help the other kids or even look at other kids throughout the morning.  He was jealous.  So jealous that I’m pretty sure they won’t be asking me to substitute in the class again.  But while I was there, something interesting happened.  I noticed that during circle time, Cort and Reid sat next to one another.  Side by side.  And then came snack time.  The kids headed over to the table and everyone sat down except for Cort and Reid.  They stood, mouths opened, and looked at one another.  Then they looked at their other teacher.  Then they looked at each other and looked at me, pleading in their eyes.  I couldn’t figure out what was wrong.  But then Ms. Wendy said, “Oh you guys!  How did you get all messed up?  You know the twins like to sit together!” She promptly moved another child who had sat in between two seats, effectively preventing the twins from sitting together.  Cort and Reid then happily assumed their seats and proceeded to eat their snack.  And I couldn’t help but feel a warmth in my heart to see their friendship and their brotherhood, in something so simple as snack time.

I’ve heard stories where twins have had close connections throughout life, even when they aren’t identical.  I can’t help but hope that Cort and Reid always share that connection – a longing to be close, even during such a simple act as snack.

You can read more about the antics of my children, and the farm we live on, at TwoBearsFarm.