Recently Dad told us about his trip through Mexico and Central America.  He ended with finally reuniting with my mom in Nicaragua.  My mom Frieda is continuing the story and telling of their trip to Costa Rica today.  Enjoy!

Hal and I and Nick left the home of my parents in Managua, Nicaragua, early on the morning of August 29, 1963, to go to the Spanish Language School in San Jose, Costa Rica. Nick was used to sitting in the passenger seat, so he wanted to sit on my lap.  I didn’t much like the idea anyway, but at that stage of my pregnancy I didn’t really have enough lap for him to sit on.  Hal put him on the floor and told him sternly to stay there.  He looked at me very sadly, but obeyed. The drive was pleasant and uneventful until we got to the border with Costa Rica.   We were shocked when the border officials told us we could not take a dog into the country until it had been in quarantine for 30 days.  Hal had come through Mexico, Guatemala, El Salvador, Honduras, and Nicaragua, and no one had objected to his traveling with a dog. 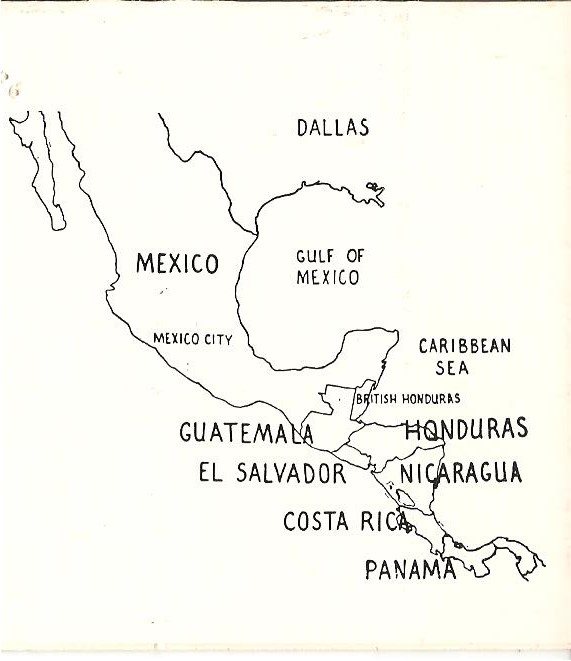 You can imagine our distress.  There was obviously no way we could stay in Nicaragua another 30 days!  There were about ten houses near the customs office building and one was a little general store where buses stopped.  We went there, and Hal talked to a bus driver who was going back to Managua.  We didn’t have much hope, but the nice man said he would take care of Nick and deliver him to my parents in Managua.  We were still a little skeptical, but since we didn’t have a choice, we left Nick with him.

We got to San Jose, Costa Rica, in the late afternoon.  Some missionaries who had just finished the Language School and had moved to begin their work in another country, had arranged for us to rent the house they left.  It was in Tres Rios, a small town very close to San Jose.  We had bought a few pieces of the most necessary furniture from them—a bed, a strange chest of drawers that had 12 small drawers in rows of 3, an elderly refrigerator, and an apartment-sized cook stove with an oven that only had “on” and “off,” and you had to turn the knob and guess about the temperature.  We were very glad to have a place to go that evening.

I’ll tell you a little more about the house.  It was only a year old, and the other missionary couple had been its first occupants.  It had two bedrooms, a bathroom, a kitchen-living room with a cement divider about six feet high to separate the two areas. The first thing I noticed was the colors—you would have to be color blind not to notice.  The living room and kitchen walls were painted bright mustard yellow.  The divider was painted to look like a stone wall with black stones and the spaces between the stones mustard color—reminded me of a leopard.  One bedroom was painted bright hot pink, and the other, the most conservative, was a bluish gray.

Giving birth in Costa Rica and the fate of Nick coming soon!