Continuing his story from yesterday’s post, my dad Hal is sharing his story of traveling through Central America on the Pan American Highway, 1963.  Enjoy the second episode in his journey:

Before I left for Mexico, someone who was giving me travel tips told me very firmly that I would have to have a health permit for Nick in order to take him through the Central American countries, so right before we left, I took him to a vet. He told me that the dog was in perfect health but needed a rabies shot, so he gave him one. 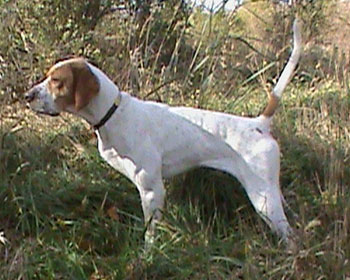 We couldn’t find a photo of Nick, but this one looks almost just like him.

I took Frieda to Houston, where we stayed all night in a motel near the airport and Nick slept in the shower.  After I saw Frieda off on the airplane, I started across South Texas on the way to Laredo, probably about 500 miles.  Nick came down with a high fever.  I noticed that he was panting. Then he began to look weak, and his investigative eyes became dull.  It was hot—possibly 105 degrees in the shade, and my vehicle was not air conditioned.  When I drove across a bridge with a river under it, I quickly stopped, took Nick on a long rope, and threw him into the water.  He was so happy, but I had to pull him out and continue on the road.  He thanked me by licking my hand and wagging his tail.

The first big city was San Antonio.  Looking at the map, I saw there was only one way through the city, and that was right through center.  It seemed to me there was a stop light every block or two, so it took me a good hour to get through the city pulling my trailer.  The rest of the trip was uneventful except that I had to stop every chance I got to cool my dog off.  By the time I reached Laredo, though, Nick was fine, and I was relieved.

I had to stop to find him something to eat along the way.  If there was such a thing as packaged dog food back then, I hadn’t heard of it.  Although I have to admit he was in some ways a hindrance, at times he turned out to be a big help. The only time on the trip an official wanted to look in my Suburban, when he opened the door, Nick looked at him and growled.  I had never heard him growl before or since.  The official quickly shut door and said I could go ahead.  At any rate, as I said before, I was very happy to have Nick’s company for the long trip ahead.

Click here to read about trying to cross the Mexican border.