The day had finally come.  I was leaving my family and traveling to Lima, Peru to be a part of Operation Christmas Child distributions.  I was so excited.  All that I was able to get done or wasn’t able to get done around the house was no longer anything to lose sleep over.  I was just a little sad to leave Bobby, my one-year-old, because he had developed a pretty bad diaper rash and you know, when your baby is hurting Mama wants to be there to comfort him.  He would be fine I told myself, but I would miss him.

My husband dropped me off at the airport somewhat early, but it was just easier for him to take me on the way to work.  I loved it.  I was at the airport, alone!  Yes this excited me.  As a wife and mother of five I am rarely ever without my family.  While I wouldn’t change my place in life, it was thrilling to be on my own for a few days.  Some thing simple like choosing where to eat without having to consider 6 other people just sounded like fun!

There was no line at the American Airlines counter and in no time I had my boarding passes.  I have not flown for about eight years and so after hearing about all the changes in security, I was a little nervous to get through.  Had I put anything in my carry on that was not allowed?  It was finally my turn to walk through the xray looking thing.  Would you believe I wore jeans with bling?  The buzzers went off, and I was motioned to step aside.  I had to endure the pat down, and they checked my hands for explosives.  The guy that checked my hands looked a little embarrassed and said he didn’t know why he had to do that to me.  Clearly he didn’t find me the least bit suspicious!

Safely through security I went and found my gate, and then decided to find a restaurant and sit down and read.  Out of all the places available I chose…McDonald’s!  There is absolutely positively no hope for me!

I would be flying from Dallas to Miami and then from Miami to Lima.  I was not worried about it at all because Carly, the other blogger who had also won the trip, from Living the Scream was flying into Dallas, and we would continue on together.  We had never met but had connected via email and Facebook, and I liked her already.  And then as I waited for her to arrive, I received a text from Carly telling me that her flight had been canceled.  She wouldn’t make it to Dallas in time, but the OCC staff worked frantically to get her to Peru as soon as possible.  She was to fly in at 5:30 the next morning by herself!  (You can read about her story here.)  I would really miss having a travel buddy, but at least I would be meeting with the team in Miami.  How could I complain?

As I was getting on the plane, I noticed a gal had an OCC tag so I quickly introduced myself.  When we arrived in Miami we walked together to meet the group waiting to fly to Peru.  We visited briefly, and I tried to talk to those sitting around, but I was very nervous and didn’t really have time to connect with anyone.

As I was getting on the flight, a flight attendant told me there wasn’t anymore room for carry on luggage and took my duffel bag.  The last time the airline took my stroller as I was boarding a plane, I never got it back!  I was hoping to be seated by someone going on the trip, but it was not to be.  I sat there for the full five hour flight worrying about getting to a new country without my luggage and not knowing a soul.  There was a guy in front of me who also appeared to be sitting by himself.  I had introduced myself, but that was about it.

When we got off the plane, I caught up to Mike who had been sitting in front of me.  He was very gracious to chat with me and stay with me through the whole process even when I chose the long line!  Ha ha! 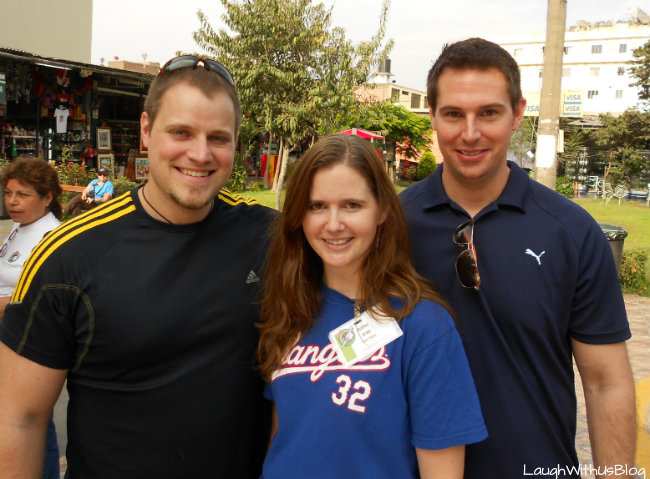 Mike is on the right.  He stood by as we waited for our luggage to arrive.  Thankfully it was there.  I think Mike was as worried about getting his as I was!  And then when we went through customs (at the very end of the line thanks to me) we ended up with Nathan on the left. As we walked, I found out that Nathan is also a blogger.  He has written a very moving post about his first day of Shoe Box distributions that I know you will enjoy reading.

You know, I know enough about how some countries function to have a proper fear of getting stuck or being taken to a room for questioning.  I didn’t know anyone.  If something happened to me who would look for me?  All these things were going through my mind and I was so, so thankful for these two guys that helped me get through and stayed with me.  They were my first friends on the trip, and I will always remember their kindness!

When we walked out, there was the group of OCC people with signs directing us where to go.  It was very well organized.  By then I was so loopy.  When one of the guys announced that he would be assigning us to two buses and he would tell us which one.  I asked him if there was going to be a big number two or if it would just be the second one in line.  He laughed out loud!  I laughed like I had been joking, but really I was serious.  How was I supposed to know they’d just announce, “That’s bus two,” when we got there.  Ha ha!  It felt good to laugh.

When we arrived at the hotel the process to get our room keys went like a flash and before I knew it I was in a hotel room in Lima, Peru, by myself.  And that’s when it hit me that I hadn’t taken a single photo all day.  For a blogger, that just ain’t right! 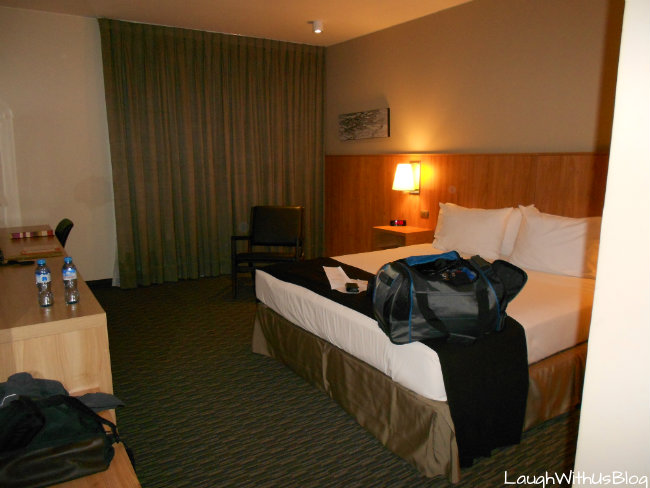 So alas here is the only photo of my travel day.  I wondered at how easy it was to get ready and go to bed without having to situate five children.  It was peaceful and quiet and I slept like a baby!