Continuing his story from yesterday’s post, my dad Hal is sharing his story of traveling through Central America on the Pan American Highway, 1963.  Enjoy the fifth episode in his journey:

The road I was taking went through Victoria, a large city of thirty or forty thousand at that time.  About ten miles from the city, I started seeing people, young and old, riding bicycles, some carrying merchandise, some with a passenger, and one or two carrying a goat. As I got closer to the city, there were bicycles in front of me, behind me, and on each side of me, making me somewhat nervous.  But they all seemed to know what they were doing, so I just kept driving steadily, prepared to stop at any moment. That night I read in Sanborn’s log that American tourists should look out for people on bicycles because that was the main transportation in that region. 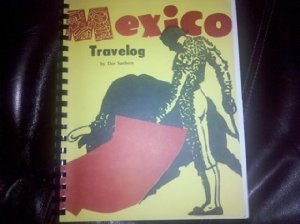 At the city limits, there were four policemen holding a yellow rope across the road.  Several people were running around with containers to collect money.  I thought to myself, “Policemen can’t do this!”  I didn’t want to give anything.  In fact, I didn’t have my money figured out in dollars or pesos either one for such an occasion.  I tried to tell the policeman I didn’t want to give them anything, but he kept the yellow rope there.  Finally, I gave one of the people some money in his container, the policeman dropped the rope, and I continued into the city. I thought it was robbery.  It was my first experience of trying to use any kind of money in Mexico, and I didn’t know the value.  I don’t know how much I gave, but they were happy.  I remembered then that different ones had told me to take a lot of dollar bills and to be ready to give to people wanting charity.

When I drove into a gas station, I was more than happy that the attendant spoke some English.  I asked him if he knew of a motel where I could stay.  He said there were none there.  Now what did I do?  So I wrote HOTEL on a piece of paper.  “Oh,” he said, “you want to go to a hotel?”  Then he directed me to a nice motel where I had supper and got ready for bed.

The next day I felt I was getting comfortable driving in Mexico with my bird dog, who was usually asleep on the passenger seat.  I came to a railroad track and a sign that said ALTO, so I stopped.  I traveled a few more miles and the same thing.  Other cars were not stopping at the tracks and honked as if they were mad at me.  I stopped at all the stop signs on the Pan American highway.  If you have traveled in Mexico, you will see the humor in this.

I stopped again for gas and managed to figure out how to pay.  But now each time I would anticipate more or less how much money I would need and have it separated in my pocket.  After I paid, I got back in the Suburban and started to drive away.  All of a sudden, a man about twenty-five years old on crutches hobbled up to my vehicle.  He wanted money.  I told him I couldn’t give him any.  He kept saying, “Please, please, just a little bit,” but I really didn’t have any money I could get to easily to give him.  I put the vehicle in gear to start moving, and when he saw I wasn’t going to give him any money, he threw down his crutches and stomped back into the gas station.