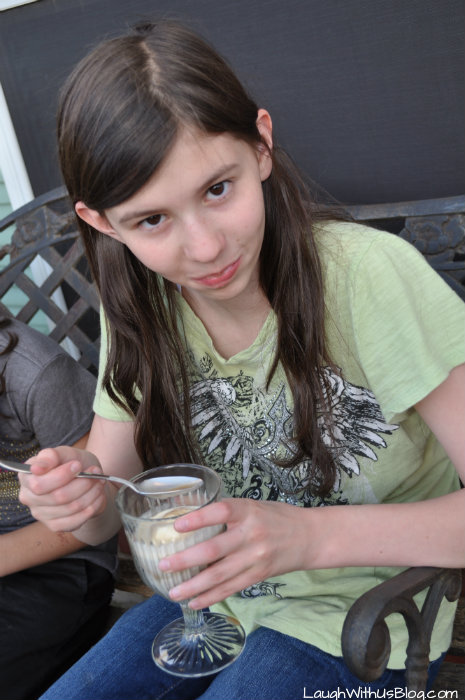 For a family of seven we go out to eat quite often.  Now, by go out to eat I’m including fast food and take out.  It’s something my husband and I both enjoy.  To make things more affordable, we share.  We have always done this from the time we dated.  Portion sizes in restaurants are sometimes so big.  It’s easy to split a meal.  Believe it or not with all seven of us, we usually order three meals and split them.  It’s always enough food.  This has never bothered me and for the most part we are received well at restaurants.  I think most people understand.  We ask for extra plates and divide it all up before anyone digs in.  So even though we are sharing, everyone has their own portion of food.

My husband also does this when he orders shakes for the kids.  This I don’t like.  This grosses me out.  Now I don’t mind if he does it for the kids, but for me?  No thank you.  This usually isn’t an issue because I normally pass on the shakes.  But one time in our recent travels we stopped at a place that boasted hand stirred Blue Bell shakes.  This time I wanted one too!  My husband ordered while I situated the kids.  He joined us with two humongous shakes.  It was just so much cheaper to get the big ones.  He asked for extra cups and began to divvy up the shakes.  He took a spoonful and sloshed it from one cup to another over and over until he was satisfied with the portions.  Proudly he handed me my gigantic cup with a little bit of shake swimming at the bottom.  There was ice cream dripped all over the table and all over the outside of my glass.  I took my spoon and got sticky up to my elbows trying to fish the ice cream from the bottom of the cup.  I felt ill!  It was so disgusting!  It didn’t bother the kids one bit though.  They readily accepted my portion of the gallon shake.  Eww!

My husband doesn’t understand what the big deal is.  Me?  I want my own small cup of shake with lid and straw and no one else sloshing in it.  Thank you very much.  Ha ha.

What about you?  Are you on team share at all costs or team I want my own?