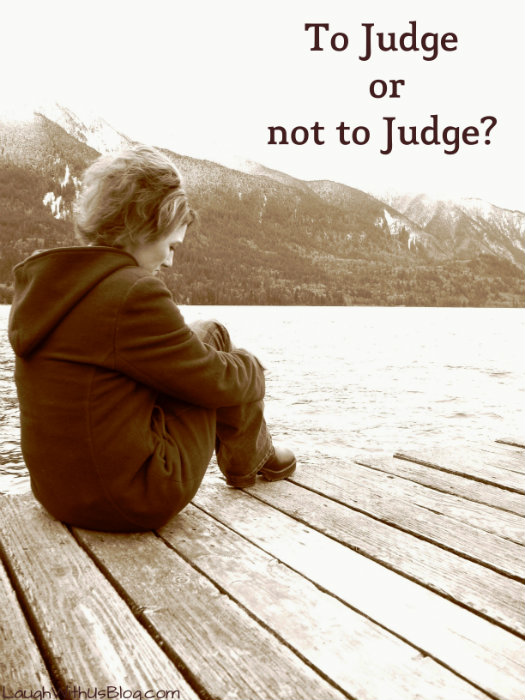 “Don’t judge,” is a phrase I hear all the time.  I confess.  I find it completely irritating.  Don’t judge?  Really?  To judge is what’s great about being human!  We learn and gather information to make wise judgments.  We HAVE to judge.

Judging or being judgmental?

It wasn’t until I found myself surrounded by judgmental people that I realized what people mean at times by “Don’t judge.”  That feeling that every move  you make is being discussed, evaluated, and ridiculed publicly in your absence is suffocating!  You’re pretty sure this is happening because, after all, you hear how others are discussed, evaluated, and ridiculed in their absence.  I just want to flee from these types of situations, but it’s not always possible.

I do think that judging and being judgmental are often confused.  The word “judge” means to form an opinion or conclusion about.  The definition of “judgmental” is having or displaying an excessively critical point of view.  I make no apologies for judging, and I (gasp) encourage my children to judge.  The hope is that we are making righteous judgments based on Biblical truths.

Let’s take modesty for an example.  That is certainly a hot topic in Christian circles.  I think we (Bible believers) would all agree being modest is Biblical.  We must then take Biblical principles and make judgements as to what that looks like in our culture.  One family decides their women must wear only dresses. Another family thinks pants are okay, but not shorts. The next family thinks shorts are okay as long as they are to the knees.  The next family has come to the conclusion that shorts are fine as long as they reach mid thigh and so on.  These families all claim to be Christians, read the same Bible, and worship the same God.  I have friends, whom I love, that fall under each of these judgment calls when it comes to how women should dress.  They have all judged what they believe to be right.  That is good!  We all need to think through issues and come to conclusions=judge!

The problem is not when we draw a line in the sand for what we and our family are going to do, but when we (taking the place of the Holy Spirit) decide what everyone else should do based on our own decision and then deem them as less…(spiritual, wise, holy or whatever the case may be) because of their own conclusion.

Judging:  “I think women should not wear shorts.”

Judgmental:  “That woman must be (Insert any number of derogatory things about her character here.) because she wears shorts.”

On the one hand we are making a judgment about what we believe to be right.  On the other hand we are putting others down and thinking badly of them because they have not come to our same conclusion.  Being judgmental is evil.  It really is!  There is nothing good or godly about it.  It is nothing more than elevating ourselves and putting someone else down.

There is also reverse judgmentalism. (Did I just make that word up?) “She thinks she is better than me because she doesn’t wear shorts.”  Really?  Who’s “judging” now?

Then I think sometimes people are accused of being judgmental when they are just making judgements for their family.  Here is when it gets tricky and people can be offended.  For example:  “Since we believe women are only modest when wearing modest dresses, we won’t allow our teenage sons to spend time with your teenage daughters who wear pants.”  Who we do or do not allow our children to spend time with–that’s a judgement call.  That is being discerning to the best of our ability whether or not anyone agrees with us.  We have to make these kinds of judgments and allow others to do the same without being offended and judgmental in return.

Sometimes our knowledge is lacking, and we are making poor or misinformed judgments.  Our beliefs and judgments change as we gain knowledge and wisdom.  We have to keep growing and seeking the Lord in our decisions, and it is sometimes in discussions that our eyes can be opened.  Nothing hinders discussion and change more than judgmental attitudes.  When we swing in discussing a subject to being judgmental, we are revealing a haughty, self righteous heart.  In doing so we, so many times, damage any chance to influence someone’s decision for good because in our attitudes and words we have already put them down.  I don’t know about you, but I can’t think of very many times that I have changed my mind about something when someone becomes  judgmental in their efforts to convince me.  If we care about people and influencing them for the better, we have got to be humble and rid ourselves of judgmental thoughts, attitudes, and words.

So where does the “Don’t judge” come from? Mathew 7:1 says “Judge not, that you be not judged.” That’s what is quoted by so many, but I wonder if they have ever stopped to actually read the passage:


The passage, in short, isn’t saying not to judge at all, but not to be hypocritical in our judgements.

In contrast John 7:24 says, “Do not judge according to appearance, but judge with righteous judgment.” NKJV  Here the Bible tells us to judge and tells us how to judge–righteously!

Should we judge?  Oh yeah!  Make a righteous judgment!  But let’s search our hearts and minds that we be not judgmental that God may use us.