Our Family Vacation to Houston Part 19

The evening entertainment that night at the THSC Family Conference was Christian comedian Tim Hawkins.  We were so excited to see him in person.  We have several of his DVDs and watch his clips online often, but we had never seen him in person.  We ate a quick supper and then went to stand in line to get a good seat.  When we walked in the hotel lobby, a lady directed us to the line for the concert.  There were already quite a few people there, but I knew we would still be able to find great seats.  The line started moving, and we all filed up the escalator and into the huge conference room.  To my dismay the two middle sections of the entire place were already completely full.  My husband ran and found some seats in the very front row of the left side section.  Oh well, we could see Tim Hawkins on the right, and the huge screen was on the left, so I figured it was good enough.

Jason took a couple of the kids to the bathroom, and as I sat there, I kept wondering how all those people were there ahead of us.  I caught the eye of the lady of the family sitting right next to us and asked her how long she had been there before we got there.  People had been so friendly for the entire conference that her response caught me off guard.  She looked at me suspiciously, raised her eyebrows and said, “Just right before you,” very defensively.  I shouldn’t have said anything else but I was still trying to figure out how all those people had gotten in ahead of us, so I asked again.  “Why?” she rudely spat out the word.

“Oh never mind.  Don’t worry about it.”  I forced a smile and then turned my whole body the other direction.

The husband, who must have had a heart, then got my attention and explained that there had been another line waiting up stairs that they let in before all of us in the line down stairs.  They had absolutely no idea there had been a homeschool conference or that Tim Hawkins was part of it.  “Clearly,” I thought to myself.  Later I wondered how they liked the show as a huge portion of the jokes were on homeschooling–ha! 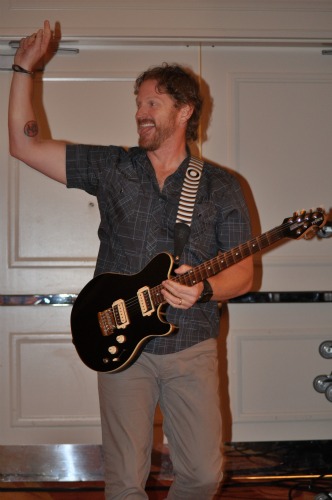 In the middle of the show Tim Hawkins was singing “A Daddy Boy Can Survive,” his version of  “A Country Boy Can Survive.”  In my direct line of vision a little girl was out in the middle of the floor doing her ballet dancing to the music.  Then I looked the other way at my children.  My husband was holding my two oldest as they kicked and flailed to the music, head banger style.  Yep, those are my girls, and I love them, and I’m sure that our Daddy Boy can survive as he was having as much fun as they were!

(How long is a Tim Hawkins show?  Our show lasted exactly an hour.  I did a poll of all my Facebook friends who had been to a show and it was a toss up.  About half said the show they went to was an hour long and the other half said around two hours.  So I guess it depends!  I hope you found this helpful!)