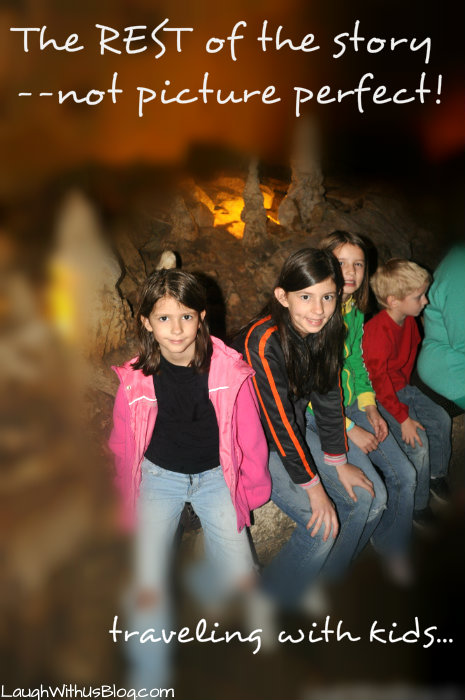 Natural Bridge Caverns was breathtaking.  It really was.  But if you’ve ever been on vacation with kids, you know that no matter how perfect the destination, sometimes it’s just not picture perfect.

The first night at a hotel is always rough.  It’s tough to get the kids to sleep, so they don’t get enough rest, so they are cranky the next day.  Our little Bobby woke up screaming every hour all night, and then was bright eyed at six am.  So by the time we arrived at the Caverns Bobby was already ready for a nap.  He wanted Mama, but there was no way I was going to be able to carry him all the way down and back up the caverns.  We made a good choice to follow at the end of the tour because he cried most of the time.  He just wanted to go to sleep.

I had warned the kids to wear their Tennis shoes, which they did.  But what I didn’t consider is that Joy’s favorite cute little tennis shoes hand holes all the way through the soles.  Being that it was unusually wet in the caves on this day, her feet were soaking wet almost from the beginning.  And she was not happy about it, not one bit.  Joy is that one in our family that can be the most fun or quite the opposite depending.

So we had our baby crying, Joy complaining, and Faith our oldest was suffering from allergy issues that morning.  Somehow the cave must have made it harder for her to breathe and she kept coughing.  As much as I enjoyed the cavern itself, I was very ready to get out of there by the end of the tour.

We loaded up in the van and decided to drive to go eat lunch before heading to The Natural Bridge Wildlife Ranch.  As we drove, the baby fell asleep, Joy removed her shoes and socks, but Faith kept coughing.  “I need to stop!” she yelled.  Jason pulled over right away.  Faith walked around outside for a minute before climbing back in and saying she thought she was fine.

Not two minutes later I heard her in a coughing fit.  I turned back and saw that unmistakable look.  “Joy get that bag.  Give it to her quick!!!”  Instead of looking at me and doing what I asked, Joy turned around to look at Faith.  When she realized what was happening she froze.  There I sat grabbing and shaking the bag furiously for her to pass it back and there she sat frozen.  In that split second, Faith took in her options, turned, and threw up all over her sister Grace who was sitting right next to her.

The fact that two of her sisters had now thrown up on poor little Grace (Joy threw up on her on our cruise last year.) hit me with a force that could only bring one reaction from me.  I died laughing.  In those situations it’s either laugh or cry right?  And my husband is always so sweet to be the one to clean up the dirty messes when he is around.  He had pulled over in the chaos.  So as he was trying to figure out how to clean up the mess with the limited resources in the van, I was on the sidewalk laughing my head off.

All of our clothes were in the hotel, but as we were leaving on the trip would you believe that Faith at the last minute decided to throw in one more pair of jeans.  She put them under the seat in the van.  Isn’t it neat how the Lord works things out?  The mess all over Grace was almost exclusively on her jeans!  I made a makeshift room with the doors of the van and had her change into her sister’s jeans.  Jason cleaned up as much as he could with wipes.  We stuffed everything in a plastic bag and drove to the nearest gas station where we dumped it  jeans and all and finished cleaning up the van.

I gave Faith some allergy medicine and within 15-20 minutes she felt fine.  She even ate a complete lunch just an hour later.  That was the end of her coughing.  Before we ate lunch we went in Walmart to buy Joy some new socks and shoes.  Bobby had a nap on the way so he was chipper again too.  Although I was very worried at one point, we went on to very much enjoy the rest of the day!