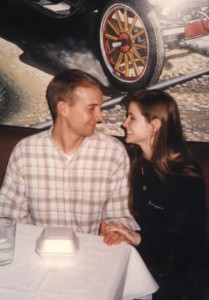 It was the Friday night after Valentine’s Day, and we had a date.  This was perfect.  (I have always thought it cheesy when men proposed on a holiday or birthday.  First of all, it would be expected, and second of all, it seems like an excuse to buy only one gift.  So the fact that he gave me a diamond heart necklace the week before . . . set me up for a lot of false expectations after we were married . . . I mean, it was incredibly romantic!)  He made an excuse to stop by his apartment, and when we walked up, there was a note on the door with my name on it.  It was a clue for a scavenger hunt.  He had created the cards himself on his computer.  They had Mickey and Minnie in a corner with hearts above their heads–so cute!  The scavenger hunt was a blast.  With every note, I found a rose.  When I found the final note, there were six roses making it a full dozen.  I turned around to find him on one knee.  All I remember hearing is, “Will you marry me?”

I must have just stared because he said, “Well?”  I woke up, said, “Yes,” and took the beautiful solitaire that he offered.  I looked at my ring.  It was beautiful, and it was my size!  (I have such small fingers that I had a recurring nightmare that when someone proposed to me they would present me with a mammoth ring that would fall off my finger.  So for him to present me with the ring already sized was a dream come true!)  I put it on and kissed him.  I was so happy; I couldn’t stop smiling.  Then he said casually, “Oh, by the way, that’s not your ring.”  Time stood still.  My face must have gone white in shock.  Was this all a joke?  What could he possibly mean by saying it wasn’t my ring?  My reaction took him by surprise.  Realizing what I must be thinking, he was equally speechless, so we stared at each other in mutual horror.  Then finding some words he spat out, “No, I mean it is your diamond.”

“What?” I managed to ask, still completely lost.

Finally, he was able to explain that the setting he had ordered didn’t come in time. He had them put my diamond in a solitaire setting so he could have a ring on the day he wanted to propose.  Whew, so I really was engaged, and I really did have . . . a diamond if not a ring!

Follow this link to read the rest of the story.