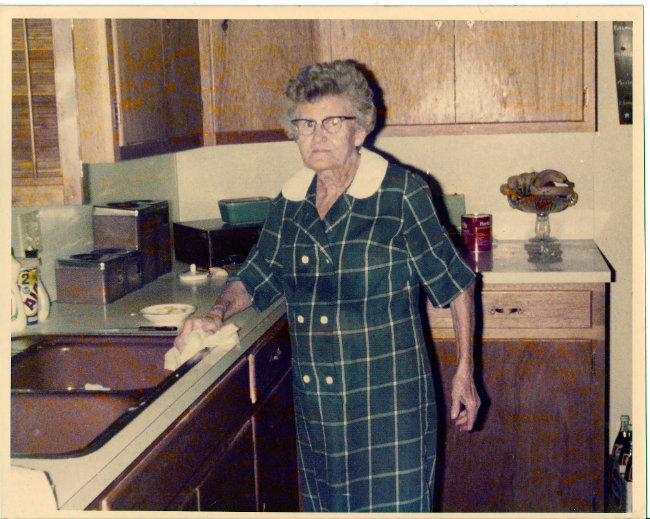 The conclusion of my dad’s first encounters with death:

Mother had a growth on her neck which she usually kept covered with a bandana.  But one time I saw it, and it looked to me like a gourd about three inches in diameter, growing around my mother’s neck.  A short time later she began to have a hard time breathing.  I wondered what would happen if my mother died, though I never said anything about it.

I slept with my brothers on the third floor of the ranch house.  One night I absolutely could not sleep for worrying about my mother.  That night she hadn’t cooked supper for us, so I knew something was terribly wrong.  It must have been about midnight when I noticed everything was quiet downstairs.  I decided to sneak down the stairs to see my mother and to ask her what would happen to her if she died.  When I got to the bottom of the stairs, Dad opened the door and said, “Son, go back upstairs, and don’t come back down.”

The next morning my mother was gone . . . .  Dad had taken her to the hospital.  When she came back two weeks later, she looked fine and immediately started back to her regular routine of taking care of the family.  It wasn’t until after I was saved when I was eighteen that I asked her what would have happened to her if she had died.

She told me then that she was a Christian.   She said that when she was a young girl in Cumberland Gap, Tennessee, she accepted God and became a Methodist and went to church every Sunday.  Her grandfather, incidentally, was a Methodist pastor about the time of the Civil War.  She said she only had one pair of shoes, so she would walk barefooted to church and put the shoes on right before she got there.   In later years, we knew she read the Bible every night, also reading it to my dad.  She constantly sang hymns (off key) as she worked around the house.  She seldom had a chance to go to church, as my dad didn’t go, and she didn’t drive.  But she loved going when we were visiting and could take her.  I hope to see her some day in heaven.