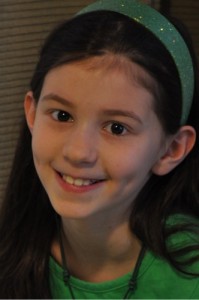 I was teaching my oldest daughter Faith her grammar lesson.  She was learning the correct way to compare things using the er and est endings.  I gave her the word “long” and told her to write three sentences, the first with no comparison, the second comparing two things, and the third comparing more than two things.  A little while later, I went back to read her sentences.  What she wrote caught me totally off guard, and I burst out laughing.  I didn’t want to hurt her feelings, so I tried to explain why I was laughing, and finally she joined me.

A week or so later I corrected the grammar of one of my girls at the supper table.  I explained the importance of correct grammar–going way over their heads, I’m sure.  Finally, I just said, “Well, you don’t want to grow as big as Daddy and have people laugh at you because you don’t know how to speak correctly.”

Faith, who had been quiet during the whole conversation, sheepishly spoke up and said, “Yeah– I wrote, ‘I am the longest.’”

I was so proud of her for sharing the joke on herself.  She gave me permission to post this story!