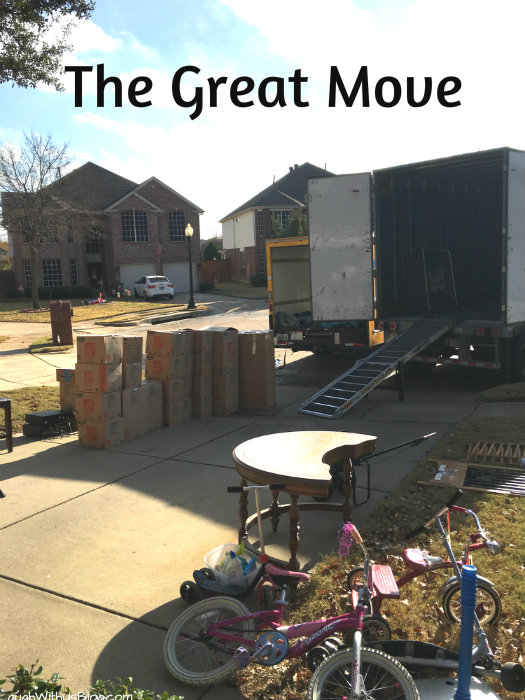 We left our Dallas area home, spent weeks in San Antonio, had a crazy Dairy Queen experience, and then made the trip back to Dallas to finalize the sale of our house and vacate the premises.

Moving day finally came. A crew arrived, and there went all of our worldly belongings onto a couple of trucks, sometimes without issue, other times crashing to the ground breaking keepsakes. Ah well, it’s all part of the process right? All of this and with our kids in and out of the way!

It was in my trying to keep the kids from making messes in the house that my first “Esther” moment happened. All of a sudden I realized mud was being tracked in. I was cleaning behind the movers and planned to drive off into the sunset as soon as the last thing was loaded on the truck, so you can imagine my horror to find globs of mud through the house. This just wouldn’t do!

Quickly I grabbed the broom and began collecting the clods. Hearing my husband walk in as I swept up the last of it, “Honey, look what the kids are tracking in…” I said, and looked up. There stood a man very much NOT my husband! Ha ha ha. The entire crew laughed about that the entire day, and I’m pretty sure that poor man would not be living that down. “Honey!” Ha!

The other incident I’ll never forget was when a man yelled down at me from the stairs, “Ma’am?” he called, “What do you want done with this humongous TV?” It’s sort of a thing of pride to my husband that our only TV is 15 years old and weighs about 500 pounds. I mean it still works, so what that the pixels are each an inch squared, words are no longer legible, and night scenes are completely black!

“You mean, you want us to load that thing?” he couldn’t believe it.

The man burst out laughing, and I began to worry that he’d fall down the stairs, he was shaking so hard. When he came up for breath he spouted, “I can just see my roommate’s face if I brought that thing in the apartment…We’d have to get rid of a BED!” Peels of laughter. Ha! Surely now I’ve earned a new TV.

It seemed like it would never happen, but late in the evening the final box was loaded on the truck. We said good-bye to the house my kids had grown up in and with suitcases packed for two weeks we headed down to the Rio Grande Valley in South Texas where we would be staying with my parents for two weeks until we closed on our house, or at least that’s what we thought…

In the months that followed I had the Worst Dental Visit EVER, rushed my son to the ER, and later ended up back in the hospital. One day maybe I’ll finish this story. One day when it’s not all so raw…