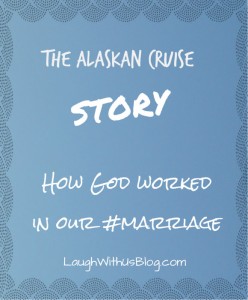 Jason and I are so excited to be taking an Alaskan cruise in a few weeks.  Alone.  By ourselves.  Without children!  Can you tell I’m still in shock?  It will be the first time we’ve ever left the children for more than a night or two.

God is so good to me, and I give Him all the glory!  You see there is a story behind the Alaskan cruise.  It is a story of marriage and differing dreams and how God has worked in our lives.

Like many starry eyed couples we got married thinking we shared the same dreams and desires in life and in many ways we did, but there are most of the time some shockers.  As newly weds we planned a detailed budget allowing for travel.  Together we dreamed of an Alaskan cruise.  At the time we wanted to go on John MacArthur’s cruise, though I don’t think he does them anymore.  We decided to save $1000 a year toward a cruise for our 10 year anniversary.  How I dreamed and waited and saved.  When we got married Jason was still in school and we were living on my Christian school teacher’s salary so this was a huge deal!  A couple years into our marriage my husband’s lack of desire to travel was one of those shockers for me.  Awesome opportunities for free or very inexpensive travel came and went that my husband wasn’t interested in, but I had that Alaskan cruise to look forward to.

Fast forward eight years.  We had two kids and were in need of a new car.  We found an incredible deal on a conversion van.  It was brand new, but a year old and still on the lot.  It was selling for about half the price of the current year vans.  Initially we took out a loan, but Jason decided to pay it off before we had had it a month.  With savings including the $8000 we had toward our cruise we could pay it off and not pay all that  interest.  It made sense to me.  In my mind I thought we would be borrowing from ourselves and instead of making payments to a bank, we would just be putting that back.  That’s when I received the blow.  Jason had no intention of putting the money back or taking an Alaskan cruise.  This all came that same year that I have deemed the hardest year of my life.  It was one more thing.

I was devastated.  God worked in my life and in my heart and over time I realized that while I love to travel and would still dream of going places, that was such a small thing.  I had so many things to be thankful for.  One day I will walk streets of gold.  How insignificant if I didn’t get to see Alaska and other places in this life.  And that became my attitude, not that I didn’t still struggle with bitterness at times, but over all I got over it.  In fact, that was one of the things I added to my 25 Random Things About Me list that I shared years before starting a blog.

So when, almost four years ago, I started this little blog with hopes of an income, my husband agreed that if it should become profitable, that money would become our family travel and entertainment budget.  At the time I never imagined the opportunities that awaited me, opportunities to travel and realize some of my dreams, but God did.  He gave me this gift.  I gave my dreams to Him, and He gave them right back.  It brings tears to my eyes.  Oh the love that God has for even me!

P.S. It does occur to me that I haven’t actually set foot on the ship and that it could sink before we go and I STILL may not get that Alaskan cruise.  Ha ha.  So you can pray with me!  Regardless of this trip in particular, God has made traveling possible for me when I thought it wouldn’t be.  My husband is now just as excited as I am about the upcoming trip!