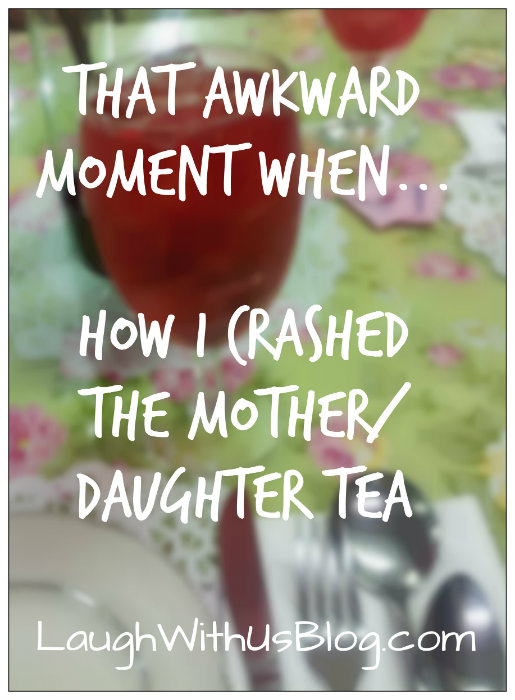 A complete spectacle.  That’s what I was.  I do try to act civilized in front of people that think they know me, you know, but sometimes no matter how hard I try well…  It was at the Mother/Daughter Tea, the place you’re supposed to be prim and proper if any, I’m sure!

The drink incident.  Our group arrived and were seated at a quaint little tea room in an antique mall.  We were given mini menus arranged specifically for our group and were supposed to circle our choices in each category.  I was parched!  I ordered Strawberry Hibiscus tea.  It sounded amazing, and I couldn’t wait to drink it.  Would you believe that after a good half hour of waiting they passed drinks around to everyone except me?  Mine had been given to someone else!  So I had to wait again for my tea.  Finally, the liquid awesomeness was in my hand and it was oh so good!  The problem was that there was more ice than tea in my goblet, and…did I mention that I was really thirsty?  In my effort to extract every lant drop of tea from my glass…the ice all came tumbling out on my face!  I managed to get most of it back in the glass and looked up.  Sure enough my incident didn’t go unnoticed!  Laugh the ladies around me did!

The sandwich incident.  There had been much talk between my girls and I over what they would order.  Eventually both of my girls decided on the Egg Salad Sandwiches.  I wrote it out for my daughter as the kid’s meal items were not already on our little menus.  After our drinks, the kids’ meals arrived first.  Our server was handing them out saying, “And I have one more chicken salad…”

I pointed at my daughter.  “That one must be yours.  You’re the only one that doesn’t have a kid’s meal.”

“But I ordered the egg salad,” protested my daughter.

“That’s right she did,” I told the server, “she ordered the Egg Salad not the Chicken Salad sandwich.”  There was a little more discussion as I insisted that I remembered she ordered the egg salad.  The server then pulled out our little menus.  There was my daughter’s menu with her name on it and in my very own handwriting it said, “Chicken Salad.”  I think my face must have gone completely white at the realization, and I muttered a very profound, “Uh….” 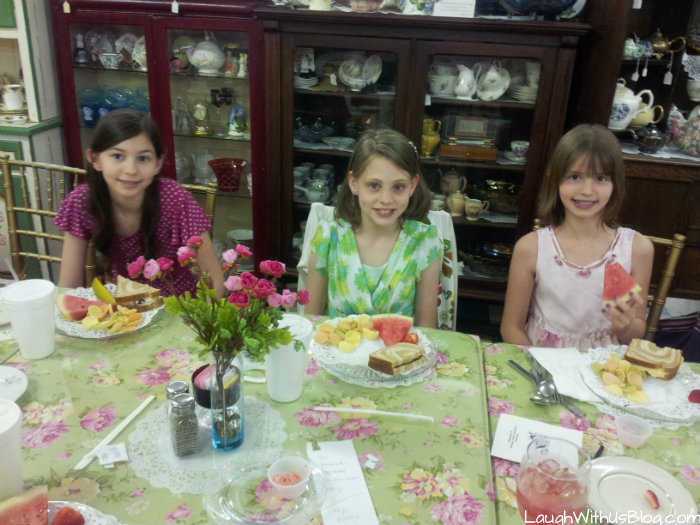 The prayer incident. As the kid’s meals had already arrived our pastor’s wife said, “Let’s pray,” or at least that’s what I heard.  I bowed my head, closed my eyes and waited.  Nothing.  When the silence dragged on, I looked up to find everyone staring at me.  Evidently she must have said to join hands because there sat the entire table linked together excepted for my daughter and I.  “Uh, I guess I missed that memo,” I blurted stupidly as I found the open hands of those beside me.  And THEN my pastor’s wife, (Would you believe?) said something like, “You can dress ’em up, but you can’t take ’em out!”  Ah ha ha ha!  I’m still laughing about that.  (Love you Danita!  You know can’t say something like that to me in a public place and think it won’t end up on my blog right?)  🙂

The scream incident.  Everyone around me was chattering happily.  I had finally gotten a refill on my wonderful Strawberry Hibiscus tea.  I don’t know what I was thinking about, maybe the above incidents, but I was completely zoned in thought as I stirred the sugar around in my tea.  All of a sudden someone grabbed my shoulder, and I screamed!  Yes, I mean an all out scream right there in the quaint little tea shop.  Have mercy!  Someone just wanted me to take a photo for them, for crying out loud!

You see what I mean?  I try to act civilized, but sometimes people get to know me in a hurry whether I like it or not, because that’s me alright, Never-Get-A-Darn-Thing-Right-Esther.  Thankfully, I was at a table surrounded by kindred spirits and what could have been a day high on my “Most embarrassing moments of my life” list actually went on the “Most fun, laughed till my sides hurt” list.  The words, “That awkward moment when…” just seem to sum up my entire life. Sometimes I wonder what it would feel like to be cool.

Danita from O Taste and See wrote a great review of Mitra’s Tea Room.  If you’re in the DFW area and looking for a Tea Room, check it out!