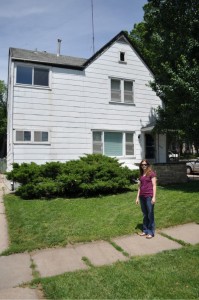 I have trouble at times driving and talking at the same time.  One time before I was married I rented an apartment in a house with a friend of mine.  The landlord lived upstairs, his sister lived in the basement, and we rented the ground level.  One day after we had just moved in, I pulled into the parking space in the back.  My landlord, a guy just a few years older than I, was out there and I rolled the window down so I could answer a question he asked me.  As I rolled the window back up and pulled up to finish parking, I accidentally hit the gas instead of the brake, sending the car crashing into the landlord’s parking sign!  To make matters worse, he thought that since I did something that stupid when he just asked me a question, I must like him.  Pretty soon he came knocking on my door asking if I wanted to go get some ice-cream.  There was no possible way I was going out with my landlord who lived up stairs.  The thought still creeps me out.  So embarrassing!

Another time my mother-in-law was visiting, and I was so excited that when I backed the car out of the garage, I took the mirror clean off.  I remember THAT look on my husband’s face when I told him about it.  That one and the look that followed when we found out it was a heated mirror so to replace it would cost some $600.  Oh yeah!  I think it is probably best when I have the option to leave the driving to someone else!