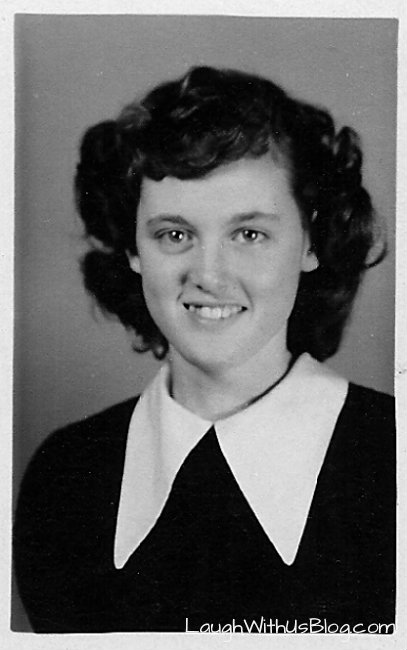 My mom Frieda is sharing her braces story with us today.  Enjoy!

I’m not sure how old was when I got braces on my teeth, but I was either eight or nine.  I know my teeth were so crooked I had a double row across the bottom.  Both my parents had crooked teeth, but not as bad as mine.  Someone told them about a Christian orthodontist, Dr. Woods, in downtown Dallas.  He agreed to put braces on my teeth for a very reasonable price.  This was probably after the war ended in ’45, and we were just slightly more prosperous than we had been.  During the war Daddy had gotten a job welding for the Link Belt Company, which made things needed for the war—for that reason he wasn’t drafted.  Dr. Woods later put braces on my sister’s teeth and didn’t charge us.  I’m sure we could not have paid for both of us.

I’ve always remembered that on that first visit to Dr. Woods, he told me he could straighten my teeth, but that my children would inherit my small mouth and large teeth, so they would have crooked teeth.  I was a long way from worrying about my future children, but I never forgot his saying that, and of course his prediction was correct, not only for my children but for some of my grandchildren.

I had to get four teeth pulled to make room for the rest, two at the bottom and two at the top. Braces were all metal then, no rubber bands or anything but wires and screws.  I remember them rubbing on the inside of my bottom lip until I got a canker sore as big as a dime.  The only thing I could figure out to get some relief was to put chewing gum over the braces.

It seems incredible now, but I would go to my appointments by myself.  From our house at 2700 Dawson Street, I would walk one short block to catch the Hickory Street bus, and it took me to the corner where the Medical Arts building was.  I would ride the elevator up to whatever floor the doctor’s office was on, a great adventure for me.  Elevators then were not self-service, but had operators, so I wasn’t alone for my exciting rides.  To come home, I think I had to cross the street to the bus stop.  I remember waiting in front of a women’s hat shop and looking at all the colors and styles of hats and veils in the window as I waited.

In 1947 when I was ten years old, our family went as missionaries to Central America, and the braces had to come off, but they had definitely helped a lot.  Five years later, we were back in Dallas for what was then called furlough, though later the name was changed to home assignment, so as not to give the idea missionaries took a year’s vacation, which was definitely not the case.  So I had braces for one more year.  When my folks went back to Central America and I went to a boarding school, the braces came off again for good.

I have always been so thankful to the Lord and to Dr. Woods.  I really can’t imagine how it would have been to go through life with my teeth as crooked as they were.  I remember how kind Dr. Woods was to a shy little girl.  I never heard anything else about him, but he is another person I look forward to greeting in heaven!