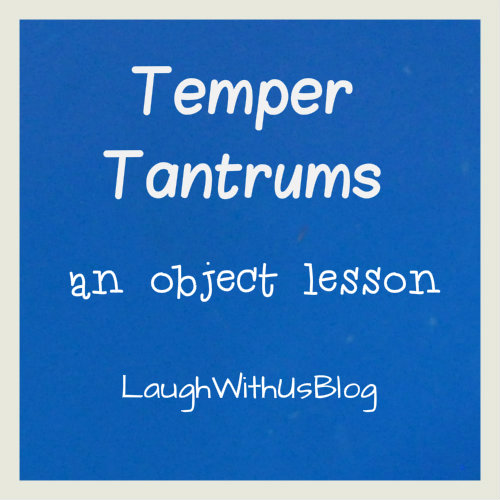 It is very common to have a two or three year old throw temper tantrums.  Of course the behavior needs to be addressed and no one would advise you to just let them kick and scream, but at that age you also recognize that children’s thoughts are usually so much more advanced than their ability to express themselves.  You can understand why they feel like kicking and screaming.

What did surprise me in parenting was to have a child well past these years still throwing the same kinds of temper tantrums.  Usually in parenting I find that when my kids begin to get naughty and drive me crazy I’m the problem!  I just hate that!  It would be so much easier to just blame them.  I usually realize that I’m not being consistent, or expecting something beyond their ability, or being impatient.  You get the idea.  And some of those things I’m sure contribute to the anger in this child, but still I saw no good reason for these huge screaming, kicking fits at her age.  I talked to her, prayed with her, disciplined her, but was just not getting through.  I had called my parents and asked them to pray.

One day my dad called and said he had been thinking and praying about the issue with the temper tantrums and wondered if I’d let him do something.  He proposed to give my daughter $7 at the beginning of the week, but every time she threw a temper tantrum she had to give me one of her dollars.  “I want her to learn that it doesn’t pay to behave that way,” he said.  I was also to talk to her about her behavior explaining what the Bible says about it and to pray with her.

At first I wasn’t sure I liked the idea.  I didn’t want her to get money for throwing temper tantrums, but my dad also included the other older children so one wouldn’t be singled out.  The more I thought about it the more I liked the idea, because it is true.  It doesn’t pay to behave that way on so many levels!

The first week she lost all her dollars by the second day.  She was heartbroken.  I continued to talk to her and pray with her after every tantrum.  The next week my dad gave the kids $7 each again.  This time she only lost $2 the whole week!  She will still throw a fit once in a while, but not with the same frequency or for duration as she had been.  I think it was a great object lesson for her!