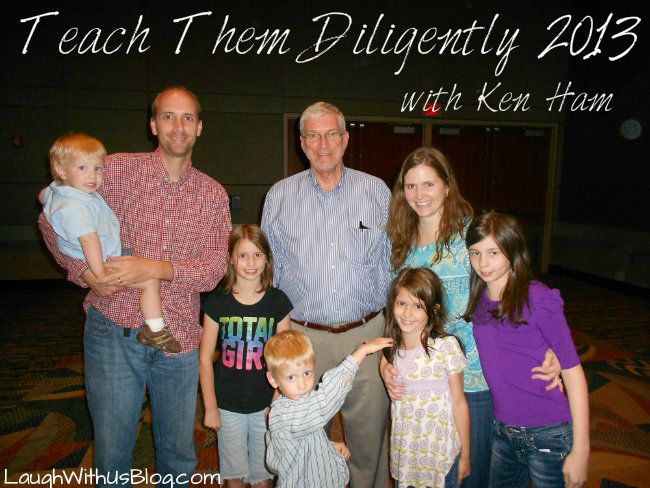 As much as we enjoyed visiting with family we were all looking forward to Teach Them Diligently, a homeschool convention that was held in Omaha at the CenturyLink Center.  Whenever we told people that we were from the Dallas area they looked at us like we were crazy.  Apparently they have heard good things about the homeschool conferences in Texas.  There were actually several reasons why we went to Teach Them Diligently in Omaha.

First of all, I won free registration as part of the Funniest Homeschool Blog Award last year.  As I looked through the conference locations, I saw one was in Omaha, which is very close to Jason’s side of the family.  We could do both on the same trip, visit family and attend the convention!  Then we looked through the speakers that were going to be there and that’s when we decided we really wanted to go!  Two of the keynote speakers were Ken Ham and Voddie Baucham and we really appreciate both of them, besides dozens of other great speakers that we wanted to hear.

The Thursday evening sessions were from 5-9!  We enrolled our four older children in the kids’ program, but that didn’t start until the next day.  I took a deep breath and thought, “Here we go!” as the conference started, and we sat in a row with all five kids.  Guess what?  They did great!  Even our two boys did a great job of sitting still and quiet for the entire four hours.  I kept thinking that our friends at our family integrated church would NEVER believe me as we usually have a lot of trouble, especially with the two little ones, in church.

It was so great to hear Ken Ham again!  After his first session we stood in line to meet him and he was gracious to let us take a photo with him.  I have been a fan of Ken Ham ever since my college days.  I went to a small Bible college in Kansas City in the late 90s.  Ken Ham came every year and did a week long conference with us speaking in chapel and in our classes.  I looked forward to it every year.  He had a fun way of speaking that kept us listening and learning.  I was pleased to still hear  him saying, “Were you there?” when referring to people talking about millions of years for the age of the earth.  Also I remember when he was talking about his dream of opening a creation museum.  Ever since it opened we have wanted to go.  We would love to go to the Mega Conference in Tennessee this year, but my husband just started a new job recently so it probably won’t be possible.  I love to dream though!