My third year teaching Spanish at a small Christian school in Nebraska, I was ambitious enough to start a Spanish club and plan a trip. The students and I worked hard to raise as much money as we could by doing odd jobs, having holiday fund raisers, and buying a snack machine for the school.

The long-awaited departure day finally arrived and my husband and I, and the grand sum of five students set out in our rented minivan. We were so excited–we were missing a week of school, after all. The first day we made it to San Antonio where we planned to spend the next day finding everything educational possible . . . . at Fiesta Texas. I mean, it is the only Hispanic theme park that I know of! We all got settled in our hotel rooms, and then piled in one room to watch TV. The movie Rainman happened to be on. My husband shouted out in his best Rainman voice, “K-Mart sucks!” Oh,wow,that word was completely off limits at our school. Everything went silent in the room except for the TV, and all eyes turned to Jason, then to me as I sat there in shock. Then there was laughter all around. I thought I’d never live that one down. And for the record, I think that’s the only time since I’ve known him that I’ve ever heard Jason say that word.

We also took in some history while we were in San Antonio, visiting the Alamo. Of course since we were so close, we had to do the River Walk and surrounding shopping as well. It just wouldn’t have been right if we hadn’t. 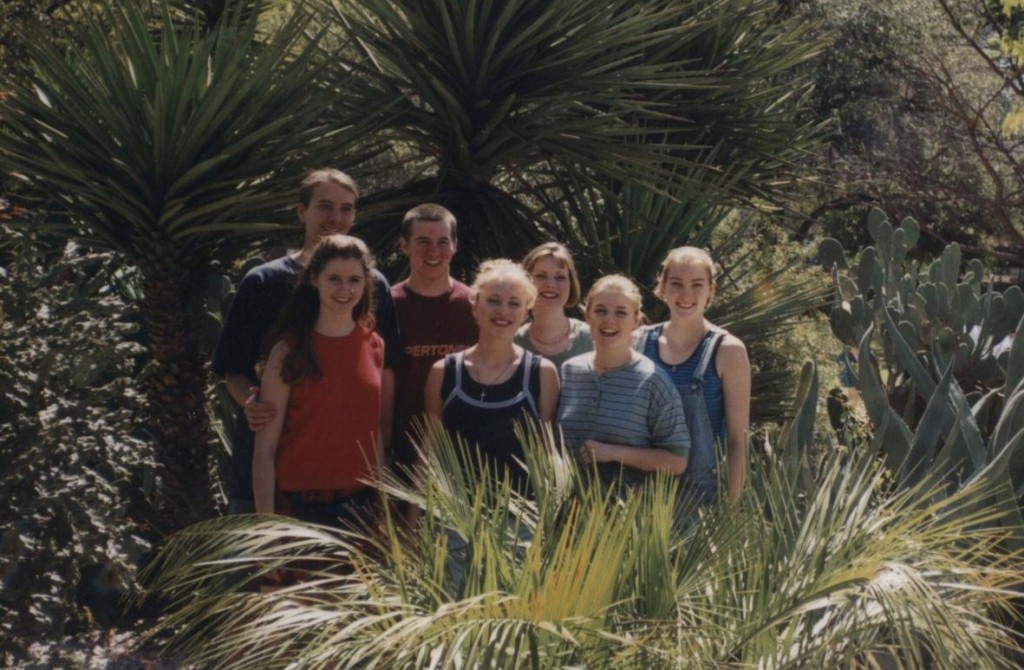 At one point during the day we were forced to park on a hill where Jason thought it best to use the parking brake. You know what’s next don’t you? You know because you’ve done it. That’s right, we drove I don’t know how many miles with the parking break on. We finally pulled over when we started smelling something burning!

The next day we drove to South Texas where we were able to stay economically with my parents. My dad taught a devotional each day on II Corinthians 5:17, and the kids learned the Spanish outline.

Our first outing was to none other than Mexico itself. We drove to this side of the border across from the town of Progresso, parked, and we all walked across the bridge into Mexico. We ate at a nice restaurant (which features skinned goats ready for roasting hanging in the window.) I was so thrilled for my students to finally experience “real” Mexican food.

The rest of the day was spent shopping around the market. The kids loved practicing their Spanish as they haggled over the prices of souvenirs with the vendors. As we walked around, Matt, one of the students, asked me if he could take a switch blade across the border. “Oh, sure,” I said,”we buy knives here all the time.” Little did I know that a switch blade isn’t just any knife and is actually ILLEGAL! I have my suspicions that he knew this because when we tried to cross the border back into the U.S. he hid the knife. The border official asked him to empty his pockets. Finding the switch blade, the officer immediately grabbed him by the arm and escorted him into a room and began lecturing about prison and fines and all manner of scary things. I followed them in there, and I don’t know if Matt was scared or not, but all I could think of was,”I am in so much trouble!” I could already see the headlines, “Nebraska student held at border for trafficking knives into the U.S.” Weighing a hundred and nothing and looking about 15 years old on a good day (though I was 26), I actually interrupted the officer, blurting out, “Oh, no, this is all my fault. I’m so sorry. You see I’m his Spanish teacher. We’re from Nebraska and he asked me if he could take it, and I told him, ‘sure.’ I had no idea he wasn’t supposed to have it. I’m so sorry. It’s really all my fault.” To my great relief the officer humphed, turned back to Matt and told him he was lucky that he was going to get off with just a warning this time. He proceeded with his lecture, but I heard none of it. I just kept nodding my head. I was so happy to leave and be able to walk back across the border with all five of my students.

The next day we got up very early and headed to South Padre Island, about an hour and a half from my parents’ home. Most of these kids had never seen the ocean before. On the way there I told them to make sure and wear sun screen. Oh, no, they all said they wanted tans. When we got there, I reminded them once again to put on sunscreen, and I thought they all did. We had a blast on the beach. I remember how we laughed at Jason’s fury at the sea gulls that would not leave us alone. He was a sight chasing them down the beach throwing sand and shells up at them.

We stayed until about mid afternoon and then drove back to my parents’ house in time to get ready for the Wednesday night service at my dad’s bilingual church. The kids sang a few songs that I had taught them in Spanish. It was there that I noticed Matt’s face. It was beet red. By the end of the service every one was starting to feel bad. 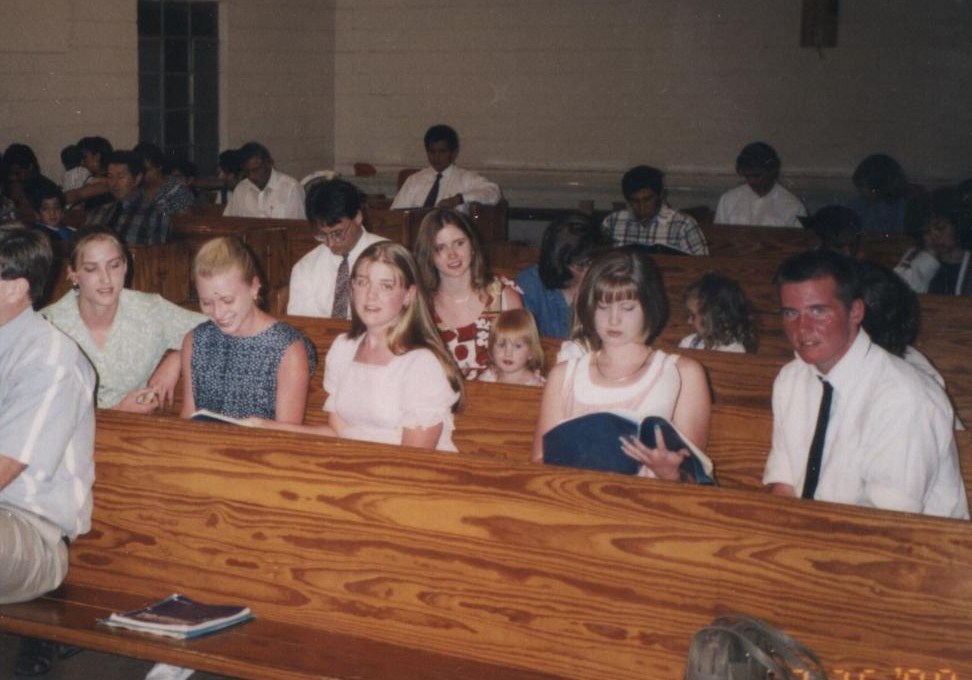 By the time we got home, the kids were all running fevers and went to bed. That was one miserable night. They took turns vomiting and were in so much pain from the sun burn that they couldn’t get comfortable. I had to cancel the activities I had planned for the next day and everyone just lay around. One of my students was so badly burned that her back was covered with large blisters. I was so worried, that I took her to a doctor. The doctor told me to rub her back down with some kind of medicine and pop all the blisters. Insane! Shortly after that I heard that that doctor skipped town and was wanted by the law.

We rallied enough to go eat that evening at the home of some of my friends in Reynosa, Mexico. They had prepared a huge feast for us. The kids always remember fondly the sweet family that hosted us. At my request, they had made cactus salad, “nopales” a favorite of mine since childhood. To this day they remember that they tasted cactus and that I ate the whole bowl of it!

The trip back was grueling with everyone stuffed like sardines in the minivan and feeling horrible. I distinctly remember telling them, “I told you so.” about the sunscreen. That didn’t go over very well. We were overjoyed to get back to Nebraska. I had a long mental list of things I would do differently on the next trip, but overall I enjoyed the trip and was pleased at all the culture my students got to experience first hand.