One day about nine years ago I worked very hard to make several batches of spaghetti sauce.  I wanted to make enough to freeze some and was feeling very much like Suzy homemaker.

We ate supper and then came the task of putting all the food away.  I found a Tupperware bowl that would be a good size to freeze some of the sauce and filled it up.  It was a brand new bowl and I was having a difficult time getting the lid closed.  I wasn’t going to let it get the better of me though, no siree.  I inched around the lid and then put my whole weight into it to seal it shut, only instead of cooperating, the bowl went flying.  It shot out from under me with a vengeance sending spaghetti sauce everywhere. 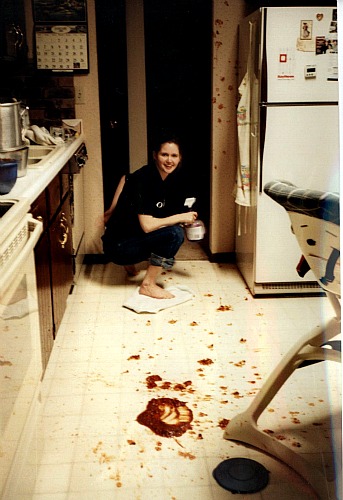 By the time I thought to take a picture I had already cleaned the refrigerator door.  The dark space behind me is a hallway with a flight of stairs leading to the front door.  There was sauce all the way down the stairs, along the banister and clear to the front door.  I laughed and laughed.  It took us literally hours to clean up.  My poor one-year-old Faith didn’t know what was happening and cried the entire time.  Jason said it wasn’t funny at all.  He told me maybe he’d find it funny in a year or so, but nine years later he still just shakes his head and says it was horrible!

A few days later I took my baby to the doctor.  When I handed the shot record to the nurse, she made a face as she took the card.  I looked down, and there splattered on it was spaghetti sauce.  When we moved out of the house, we were still finding spots of sauce to clean up.  I don’t know that I’ve ever made such a big batch of sauce again!