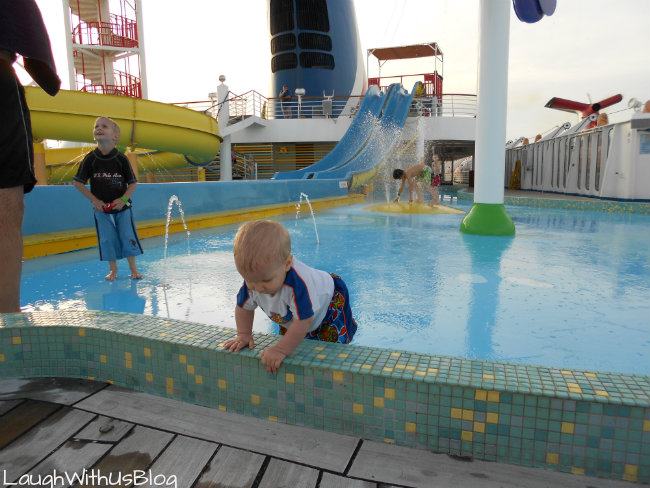 After Jason and I ate a late lunch we picked up the kids from their activities and took them back to the water slides.  This time we let Bobby play in the water too even though it was a little chilly.  He had so much fun that I couldn’t get him to look at the camera at all!  I did the water slides until my legs would not take me back up the stairs.  Then we went to change clothes to get read for our evening meal.

The ship set sail at about 5:00 that evening, just before we went to eat supper and let me tell ya it was rocky.  Pretty much everyone told me that I wouldn’t get sea sick on a cruise.  Pretty much everyone was wrong!  Ha ha!   At first I just felt dizzy.  I got through supper okay, but when we dropped off the kids once again for their evening at Camp Carnival I felt pretty bad.  I was super tired and we just waited out the time until the kids’ activities were over. 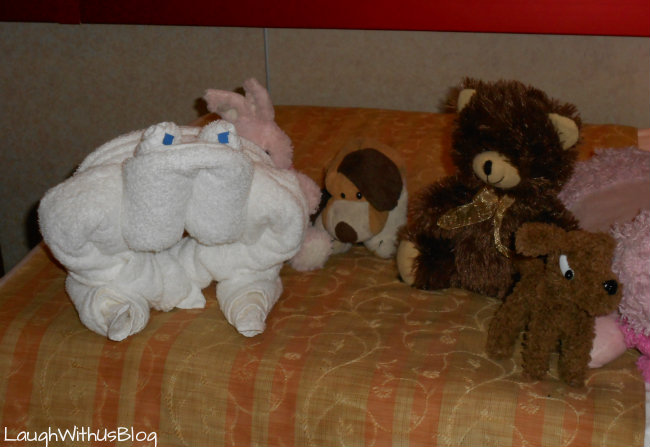 Our room steward had fun lining up the kids’ stuffed animals with the towel animals much to the delight of the children.  On this night we put the kids to bed as fast as we could.  I dug the Sea Band bracelets out and took some Dramamine (I was so thankful I bought and brought them anyway!) hoping that I’d make it through the night.

A couple hours later we woke up to Grace screaming, “She did it on purpose!”  Evidently the ship’s motion was more than Joy could handle.  From the top bunk she had thrown up all over Grace on the bottom bunk.

“Esther, I need help,”  Jason called me in the other room.  Half asleep he was trying to clean things.

I got there took one look at the situation and said, “Stand back,”  I grabbed all of the dirty bedding, rolled it up, and threw it in the hall way along with Joy’s special bear, pictured above.  There was just no way to salvage it.  The poor girl was sick and lost her special bear.  I changed the girl’s clothes gave Joy some Dramamine, let the staff know there was a surprise waiting for them in the hall, and went back to bed.  Whew.  That was the end of day two.